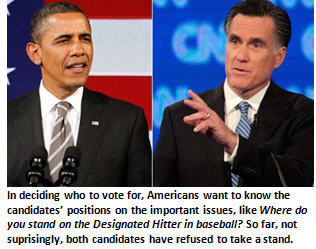 At the two recent political conventions, both candidates made promises they have no intention of keeping and scurrilous attacks about their opponent’s record. Both made bold claims about how they plan to save Medicare, reduce the debt, create more jobs and piss off China.

Reporters have been asking pointed questions about how their plans will impact global warming of the middle class, reduce defense spending on the elderly, and protect the right to tax gay marriage. But so far, no one has asked the candidates the important questions that undecided, marginally aware voters with the attention span of a gnat want answers to, like Who’s running for president this year anyway?

Here are a few critical questions uninformed votes are demanding the candidates address once and for all:

Regardless of the candidates’ answers to these questions, most marginally informed voters’ decision about who to vote for may come down to the candidates’ last names. Romney’s name, when you scramble the letters spells R-MONEY. But Obama’s name, when you scramble it (and misspell it), spells A BOMB A! It would appear that Romney wants to give Americans back R money. Obama just wants to blow us all up. Based on this compelling argument, uninformed voters are leaning 5 to 1 in favor of Romney.