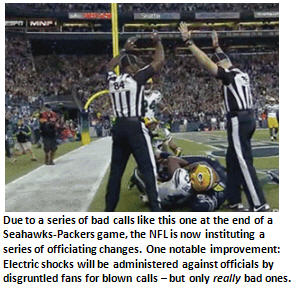 Bowing to public pressure, the NFL has fired all the replacement referees and replaced them with Foot Locker salespeople. NFL Commissioner Roger Goodell issued a press release, stating, “It’s clear that the level of officiating in recent weeks is not up to the rigorously high standards of this great league. That’s why we are immediately replacing all the lockout substitute referees with Footlocker clerks like my friend Brad here.” Goodell went on to cite several factors behind this bold decision, including Footlocker clerks’ strong interpersonal skills, their ability to deal calmly with irate customers, and the fact that most of them already have a whistle.

Goodell added “the league will save thousands of dollars on officials’ uniforms because these people already have the striped shirt.” The NFL has offered to pay the Foot Locker refs a generous hourly rate of $9.00 an hour, which while modest compared to the league rate of $50,000 the average NFL official earns, still represents a 25% pay hike for most of these new officials. 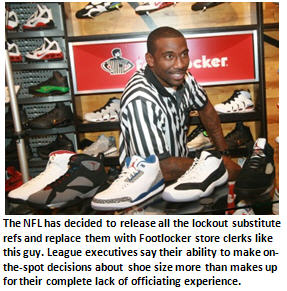 Other changes the NFL is making in response to concerns about sloppy officiating include installing web cams on every hash mark and on the fronts, sides and rear of every player’s helmet so that they can have no less than 387 video angles of every play. They will also institute voting machines in the luxury boxes so fans can give a THUMBS UP or THUMBS down and override calls they disagree with.

Perhaps the most controversial change is the institution of severe consequences for poor officiating. Any new referee guilty of three or more blown calls during a game will be pummeled in the end zone by a randomly selected group of 300 lucky – and livid – hardcore face-painted fans, then permanently relieved of their whistle. “It’s harsh, but we think it will result in far fewer missed holding penalties,” said an optimistic Goodell.

In other NFL news, the annual Fanfest Referee Appreciation Day originally scheduled for next weekend has been indefinitely postponed.

That’s the view from the bleachers. Perhaps I blew the call.