Women, help end discrimination against men. Get struck by lightning. 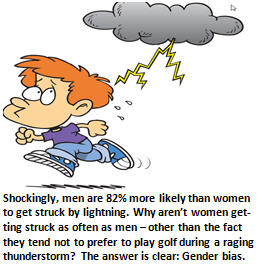 I am a staunch advocate of women’s rights to equal treatment and nearly equal pay. I’ve even watched Oprah and Ellen on occasion. (But please don’t tell my golfing buddies. They would never understand.) There is no denying that women have been victims of social injustices and hardships men have rarely had to endure. I’m talking, of course, about cellulite primarily.

The tables, however, have recently turned. I’m delighted to report that women have made amazing strides in the past 40 years – in the battle against cellulite. And even more than that. In fact, in the past ten years alone, for reasons unfathomable to me, two different women have received promotions I totally deserved simply because they were more qualified than I. Discrimination against men is real – and it’s everywhere.

Being a man in our society’s Age of the Woman is no picnic (speaking of which, I sure hope my wife baked my favorite homemade apple pie for our picnic she’s been slaving over all morning). The reality is that every day, thousands of men suffer quietly through pain and indignities women rarely are subjected to – without ever complaining. It’s time women became aware that men suffer insidious discrimination every bit as much as women do. 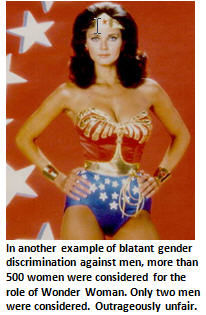 To prove my point, I did some in-depth research (consisting mostly of watching YouTube videos of drunken people falling down). I was shocked to learn that discrimination against men is far more widespread than I’d ever imagined. Check out this representative sampling of egregious gender inequality that takes place daily with barely a mention in the mainstream media:

Men are almost five times more likely than women to get struck by lightning. Men account for 82% of all lightning strike injuries. True! Oh sure, some conspiracy theorists speculate that it’s because men spend more time outdoors than women and are more hesitant to head for safe harbor when their golfing or fishing buddy asks defiantly you call this a thunder storm? Clearly, God plays favorites towards women (with the minor exception of that small matter of childbirth).

Men are seven times more likely than women to die from attempting to jump across subway tracks with a high-voltage third rail just to prove they can do it – which also conclusively proves that men are far braver than most women. But you never read studies about that either because women own 98% of all news media outlets – a figure which, while shocking, is easy to believe if you’re completely hammered.

Men are 86% more likely than women to get seriously injured attempting to feed a shark in shark-infested waters. Watch any video of a shark attack during attempts to feed them. The victim is almost always a male. Seems even sharks discriminate against men – perhaps because of the bad publicity famous male director Stephen Spielberg gave them in JAWS. 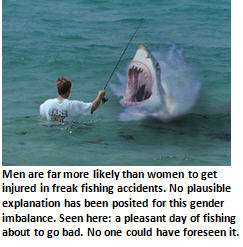 Here are a few more startling statistics I stumbled upon while fabricating my research, which conclusively establish extreme gender bias: 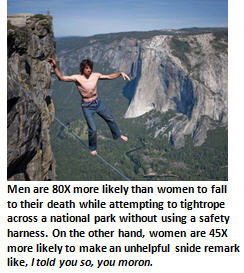 The more research I almost got around to doing, the more shocking the findings. The mainstream media won’t report on this outrageous imbalance between the sexes, but believe me, it’s real. And the problem is getting worse. Just ask my wife and daughters. They tell me they see examples of this blatant gender discrepancy almost daily.

It is time our society took a close look at how men are routinely subjected to pain and humiliation in ways women almost never experience. Compounding this problem is the fact that in many instances, women turn a deaf ear to the indignities males suffer, showing little compassion. I recall just last week overhearing a callous woman muttering under her breath insensitive comments about some fellow, like what a dumb ass and I can’t believe I’m married to this guy – right after I turned off the lights to go to sleep.

Men need to fight back against this unequal treatment. I’ve much more to say about this crisis of reverse gender discrimination. But I have to sign off for now. My neighbor Bernie just bought a new motor scooter, and he’s rigged up a take-off ramp from a spare sheet of drywall and 10,000 LEGOs his kids no longer use. He is confident he can jump over a row of 15 people while riding backwards on his scooter. So naturally, I’m volunteering to be one of the 15. Wish us luck!