[This week’s column is written by veteran sitcom writer/producer Miriam Trogdon. I am privileged to turn over the reins to Miriam this week. – TEJ] 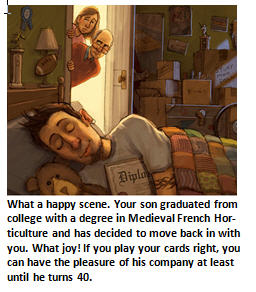 I hear so many of my baby boomer friends complain that they never hear from their children.

–       As soon as my son turned eighteen, he was out the door. I thought he might return for his belongings, but instead he got two jobs and bought everything new.

–       My daughter graduated from college and stayed out east. She started working, got a loan for a car and asked to be taken off our phone plan.

And the most common sad tale:

–       I thought for sure my kid would at least need us for health insurance, but no. He made sure his new employer had a great plan and then he moved out for good.

Sound familiar? Then you’re certainly not alone. Most boomers would give their eye teeth to have their semi-grown children living back in their homes, but alas, no matter how hard they try, they are unsuccessful. But not I. My husband and I are proud to reveal that our 24-year-old daughter moved back into our home after college and remains there four years later!  And I want to share some of the ways we make sure this ideal situation doesn’t change.

1)       Make sure they have a private room and bath. These items are must-haves for move-back-inners. So, even if you must part with your own master bedroom and bath, offer it up and you just might be rewarded with an extra mouth to feed.

2)       Speaking of foodstuffs, buy lots of it and make sure it’s exactly what your twenty-something craves i.e. red bull and liquor. And a hot meal every night is usually a draw, especially if that meal is brought to them in their room. And is accompanied by Red Bull and liquor.

3)       Concerning their room: make sure it is entertainment-friendly. That means at least three top-of-the-line computers. They’ll need one for television/movie streaming, one for game-playing and a spare one in case the other two aren’t giving them instant gratification. Sure they could “make do” with only two. They could also “make do” living elsewhere. Like a friend’s parents’ house. So ask yourself – do I want a reasonable electric bill or do I want constant contact with my adult child?

4)       Never mention “getting a job” to your live-in child. They’ve been partying hard for a decade or more for Lord’s sake, and they need a friggin’ break! Remember, once they work, they have money, and once they have money, there’s always the tiniest of chances that they will spend that money on rent.

1)       Don’t suggest they rise before 1:00 p.m. They need their rest, and too much daylight is not going to make them want to stay. So, keep the noise down, too. If you must vacuum and do laundry, do it when they are out – usually after midnight and before 6 a.m.

2)       Do not expect your children to walk and feed the animals. Even if the animals belong to said children. Just because they bought/rescued them doesn’t mean they intend on nurturing them. And don’t buy the cheap pet food. Your child is grown, not stupid.

Yes, my husband and I have burned through most of our 401K and the rest of our savings keeping our big one at home, but I am proud to say, there is very little chance of her ever leaving the nest. We did it and, by taking my advice, you can, too! Now, if you’ll excuse me, it’s late, and someone’s horse needs currying.

[About the author:  Miriam Trogdon was born. After that she lived for over two decades in the quaint town of Charlottesville, VA until she uprooted herself and her husband and moved to the quaint town of Sierra Madre, CA. While there, she wrote scripts for many sitcoms, including Newhart, Roseanne, Sabrina the Teenage Witch, and others. Often for money.]