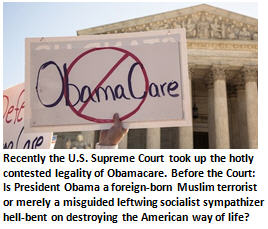 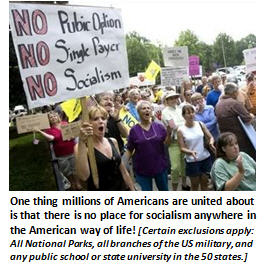 Until Obamacare (known by liberal America-haters as the Affordable Care Act)  was enacted, America was the proud supplier of one of the world’s elite healthcare systems – and by elite I mean #37, right behind Costa Rica, and several places ahead of Pakistan.

Sure, 32 of the world’s 33 most highly developed nations all have universal healthcare. But Americans have never followed the herd. We forge our own path, dig our own grave. Who invented the Snuggie? The Clapper? The TV show Ice Road Truckers? One word: Pioneering Americans. (Okay, so we don’t rank very high in global word count rankings.)

So what if prior to Obamacare, the average American had been paying on average 40 to 50% more per year than countries with universal healthcare? Those other 32 countries include backwards, oppressive socialist-leaning regimes like Denmark, Norway, Germany, Switzerland, Canada and (gasp) France. And do we really want to look to France as a model for anything? (Okay, France, I’ll give you points for inventing crêpes. They’re yummy.) If you don’t agree that Obamacare means an end to our freedom, just look at some of its core provisions. It denies freedom-loving Americans…. 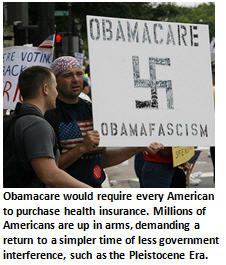 Oh sure, I might decide to buy health insurance eventually – maybe when I’m 85 and eying a hip replacement or a heart transplant. But until then, no meddling government bureaucrat has the right to make me buy health insurance, not when I can make far better use of that money buying Power Ball lottery tickets.

Just over a week ago, the U.S. Supreme Court listened to arguments about the constitutionality of Obamacare. Obama wants to force every American to purchase health insurance, much the way we’re required by law to buy car insurance. Does Obama think the American people are cars? What an insult. If so, my body would be a broken-down 1982 Chevy Citation with the radio missing, but I digress.

I believe it was Patrick Henry who once tweeted Give me liberty and give me death! – or something like that. Our fore fathers – five if you include Alexander Hamilton –  founded a Christian nation (Jews are allowed in limited quantities if they behave) based on the fundamental principle that all white, male, Christian, educated, landowning Americans with slaves were endowed with certain inalienable freedoms:

When it comes to our cherished freedom to decide how to manage our own health – listen to Patrick Henry. Give us liberty and give us death. Say Hell-No to Obamacare and Hel-lo to undetected stage-four lymphoma.

Who among the top 1% would benefit from Obamacare? No one. Oh, sure a small number of people might be better off – and by small number I mean barely 32 million previously uninsured Americans – none of whom are Facebook friends of mine. And who is President Obama to tell me I must spend a portion of my hard-earned paycheck on health insurance premiums instead of investing it wisely as I see fit, by placing it all on Daddy’s Overdraft in the third race at Pimlico? (He’s excellent on a muddy track.) 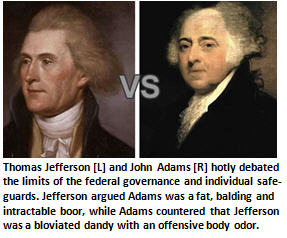 If all goes well, come June, the Supreme Court will hand down its decision to overturn this nefarious threat to our liberty. We’ll all happily return to the wonderful way things were, safe from the threat of a hostile government takeover of healthcare, comforted knowing that our civically-minded health insurance companies will do their darndest to resist shareholder demands to raise our premiums for years to come.

But if the Supreme Court upholds Obamacare, you can kiss all your cherished personal liberties goodbye forever. Before you know it, the government will start regulating local libraries, public schools and national parks – someday maybe even Medicare. Oh what a hellish nightmare!

Please join me in praying that God will direct the Supreme Court to strike down Obamacare and return our great nation to a simpler time when healthcare decisions were private matters, and the government stayed out of it entirely – the 13th century.