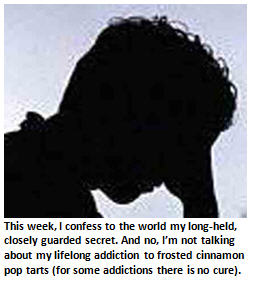 I’ve decided to come out of the closet about my little dark secret. I’ve lived with it in quiet shame my entire life. Until now, nobody has known about it. Not even my kids. Will they respect me after they read my public confession? Will you?

I simply can’t hold this secret in any longer. I hope I won’t ruin my marriage. This is really hard to talk about. I am searching for the right words. Okay, here it comes……

I am ………… a lifelong……… slooooooow reeeeeeader.

I confess. My slow reading problem started in first grade. I would read a passage like this: See Dick. See Jane. See Spot. See Dick throw the ball. See Jane catch the ball. See Jane through the ball. See Spot catch the ball… and I’d think, Golly! (What do you want – I was in first grade.) This is going to take forever! Couldn’t they have shaved off five pages simply by stipulating in one concisely-worded sentence that the three of them were playing with the ball? Little did I know then that Dick and Jane were just the first chapter of my slow reading saga.

In seventh grade, our teacher at my all-boys school, Mr. Alanson, made us read Marjori Kinnan Rawling’s Pulitzer Prize-winning 1938 novel The Yearling, about a young deer named Flag that becomes a family pet, then eventually dies, and everybody cries. Scientists should have stopped searching then and there for a cure for insomnia. I had discovered it. Took me forever to wade through this award-winningly boring book. [Suggestion to the author: Marjori, next time, spend a little more time on plot development and little less time describing a tattered leaf’s meandering journey down a gurgling creek.] 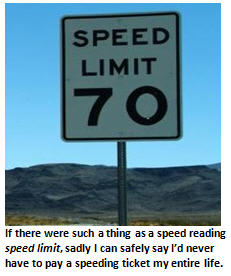 In ninth grade, our teacher, Mr. McClintock, made us read James Michener’s classic, The Source – all 1,088 pages of it. I believe the teacher chose this literary classic primarily because he secretly despised obnoxious, testosterone-laced 15-year old prep school boys and figured that forcing us to read this book would ensure his students were as miserable as he was. But 1,088 pages? Seriously, teach’?!

I doubt when Michener wrote this book, which covered the 4,000-year history of a Middle Eastern settlement, that he was consciously trying to ruin my life. In this book, he would take five pages to explain in mind-numbing detail the process by which the text on a stone slab was inscribed by a primitive chisel and then four more pages devoted to how the chisel was made. I finally finished this book in my junior year – of college. I’ve seen glaciers make more progress in a year than I made reading this tome.

In college, I unwittingly signed up for an ancient Greek history course which required us to read seven dauntingly thick books. At my reading speed, I estimated I’d finish the reading list shortly before retirement. Typical of the reading list was the coma-inducing treatise by the Athenian general Thucydides called The History of the Peloponnesian War. It consisted entirely of passages like this: 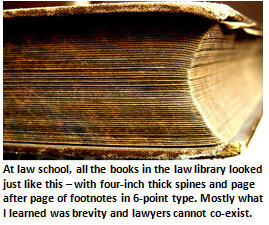 Corinth, exasperated by the war with the Corcyraeans, spent the whole of the year building ships, to form an efficient fleet; rowers being drawn from Peloponnese and the rest of Hellas. The Corcyraeans, having not enrolled themselves either in the Athenian or in the Lacedaemonian confederacy, decided to … .zzzzzzzzz.”

Jesus, take me now! It was excruciating. I never actually finished it. I jumped ship somewhere between the sea battle off the Lacedeaemonian coast and the 18-month siege of Argos, so I never actually found out who won. But I’m pretty sure France surrendered.

In law school, my reading challenges only got worse. My very first homework assignment was the famous Supreme Court case, Hawkins V. McGee. This ten-page case about damages for a badly performed hand surgery took me four hours to read. In my defense, that’s in part because every word that was not a preposition was in Latin. Here was a typical passage:

At least, that’s how I remember it. 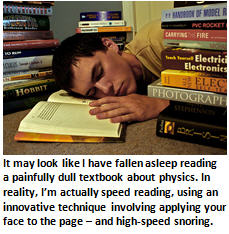 I was so discouraged I decided to take an Evelyn Wood Speed Reading course. That’s where you rapidly zigzag your index finger down the page, skimming two pages in approximately the time it takes to blink. Well, I must say, the results were amazing.

Impressive, eh? And it only cost me $500. So there you go – the deep dark secret I’ve been hiding all these years. I hope someday you might be able to accept me the way I am. In the meantime, I’m thinking about asking $10,000 to share my deep dark secret on an upcoming Barbara Walters special. (Don’t tell anybody, but I’d even take half that amount.)