Getting a colonoscopy is better than sex… 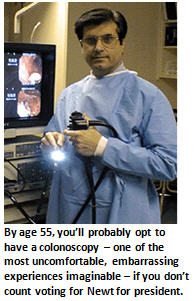 … with an elephant. I would put it right up there among the most unpleasant experiences I’ve ever had to endure, tied with having a root canal or listening to a life insurance sales presentation about the benefits of whole life versus term. Recently, I had a colonoscopy.  It’s one of those milestone events in life that apparently you’re supposed to do every few years once you hit 50, like starting to think about retirement planning, only a lot messier and more humiliating.

If you have never had a colonoscopy, let me give you a preview of what you’re in for. It’s no fun. They call it a “minor procedure.” But there’s nothing minor about it if you ask my colon. A doctor shoves a 142-foot tube called an endoscope up your butt to check out your insides. Essentially, it’s the same as the Roto-Rooter guy, but without the clipboard and baseball cap, and in this case, the backed-up pipe they’re inspecting is your intestinal tract. And this is one serious tube they insert. I am not completely sure of the exact route the endoscope took inside me, but I believe it included a side trip to my spleen before moseying to take a peek at my left ear canal.

Most qualified colonoscoptologists (at least I’m pretty sure that’s what they prefer to be called) will take careful safety measures to ensure they don’t jam the tube in so far that it might come out a facial orifice. Avoid any doctor who refuses to make that assurance. Before last week, if you told me that I was going to voluntarily succumb to allowing a complete stranger to stick a tube the length of a basketball court up my back side and take pictures of my interior (probably to post on Facebook), I would have laughed my ass off. Perhaps I should have rephrased the previous sentence. 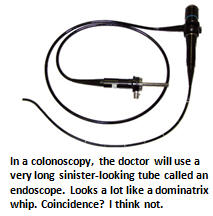 First, you’re not allowed to eat any solid food the entire day before the colonoscopy. Then there’s this special elixir they make you consume the day before your procedure to clean out your pipes. It’s called MoviPrep. What a terribly misleading name – MoviPrep. The only movie that I was getting prepped for was a movie about the inside of my colon. And I wasn’t even allowed to have any buttered popcorn, raisinettes or gummy bears before the show.  A more accurate name for this foul solution would have been ColonErupt or perhaps SphincterSpew. You mix two white powders with water in a plastic container to make 64 ounces of the most vile-tasting liquid ever created by mankind. 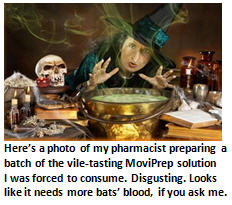 This was unquestionably the most disgusting concoction I have ever been forced to swallow – even worse than Old Milwaukee Bacon & Mint-Flavored herbal champagne. If our military is not currently applying MoviPrep to pressure captured Al Qaeda terrorists to confess, they are missing a huge opportunity to secure our nation’s safety. I would have confessed to stealing the Lindbergh baby if I thought it could get me out of having to take another sip of this God-awful crap.

I had to take not one, not three, but eight 8-ounce glasses of this stuff. But I still have not gotten to the worst part: what happens approximately 27 minutes and 35 seconds after you have consumed your fourth 8-ounce glass of this devil’s brew. Imagine Mt. Vesuvius erupting, only in this case, playing the part of Pompeii would be your toilet bowl, and the locus of the volcanic eruption would be your derriere. If you will recall your ancient Roman history, Vesuvius erupted not once but multiple times over several days. That’s pretty much the scene I went through, only in my case, it involved panicked, adrenaline-pumping sprints to the toilet for the better part of seven hours.

On the bright side, I’m pretty sure I lost six pounds that evening. FYI, if you’re looking for a weight loss plan that does not require any exercise or long-term starvation dieting, and you’d like to lose up to eight pounds in a 12-hour period, I think I’ve found your solution, so to speak. 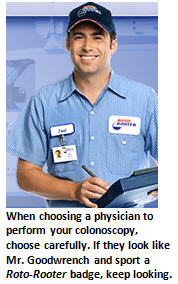 I would like to shift my focus now to what happened the next morning in the operating room, as the doctor prepared to take a journey to the center of my bowels. But to be honest, I can’t remember a thing that happened after they started sedating me. The entire colonoscopy took about an hour. I have no memory of anything that happened during the procedure, or for that matter, the next two hours afterward.

My wife tells me that the first words I incoherently slurred when she met me in the recovery room – and I’m not making this up – were about the drug they used to sedate me: “Wow. They should give this drug to everybody, and no wars would ever get started.”

I am glad that this whole disgusting episode is behind me. Again, perhaps I chose my phrasing poorly in that last sentence. They recommend I have another colonoscopy in five years. The good news is that after my tenth colonoscopy, I just present my punch card and the eleventh one is free.

My point is that if you’re fifty or older and you’ve never had a colonoscopy, I urge you to get this done as soon as possible. Oh, not because it’s the medically smart thing to do at this stage of your life. Mainly, I would just like to feel like I’m not the only sucker who has had to endure this humiliating midlife rite of passage. On reflection, perhaps I should have rephrased that last sentence as well.