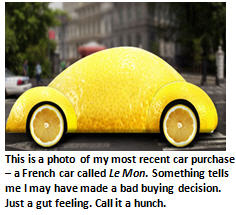 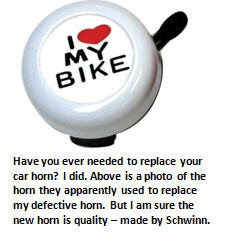 My Isuzu Impulse (1984) taught me the importance of following your passion, although in hindsight, this might not be exactly what the author of What Color is Your Parachute meant by the statement. When I saw this car, which looked like a poor man’s Porsche, it was love at first sight. I had to have it. It was sexy and sleek, with a dashboard that looked like a cockpit.

There were only four things it lacked: quality, power, durability, and quality – oh, and quality. Yes, that car ran like a dream (as long as you kept it under 45 mph), for the first 7,000 miles. After that, I don’t really remember much, as it spent most of its time in the shop. Apparently this Japanese car came off the same assembly line that built my Chevy Malibu.

My Mazda 929 (1991) taught me that sometimes you need to pamper yourself with the finer things in life. This was my first exposure to heated seats and a car capable of exceeding the speed limit. So what if the trunk was barely large enough to store a laptop. I didn’t own a laptop. My 929 also taught me a lesson about moderation in everything – particularly my speed – thanks to three speeding tickets in ten months. 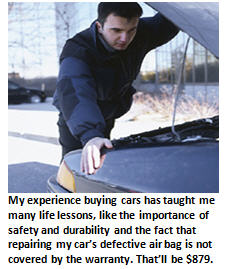 My Ford Windstar (1996). Now a parent of two toddlers, my luxury car days were fading in the rear view mirror. This was my first minivan. This car taught me the importance of showing my patriotism by Buying American. With my Ford Windstar I made a statement: “I am a patriotic American car-buying suburban soccer dad in my forties with bad knees. I hereby surrender my last vestige of being suave, sophisticated or desirable.”

I had never bought a Ford before. Now I understood why. While Ford’s motto once had been At Ford, Quality is Job 1, I must have purchased it when their motto had evolved to At Ford, Quality is Job 17, just behind shaving 15% off the cost of manufacturing transmissions. After 50,000 miles, I had to have the car’s engine rebuilt at the bargain cost of just $3,900 (but in fairness, that included a free car wash). My Ford Windstar also taught me how to get over my patriotic Buy American car phase.

My forest green Aston Martin $125,000 exotic luxury sports car (1998) taught me that some people are so gullible they will believe anything they read in a list. I also purchased two F-16 fighter jets (one for the Mrs.) and Canada’s Prince Edward Island (they weren’t using it).

My Toyota Minivan (2000) taught me the lesson of patience. No matter how much the kids would scream in the back seat or shout at me to intervene and “tell Rachel to stop hitting me” during our annual 11-hour pilgrimages to grandma’s, I learned to control my frustration and the resist the temptation to eject the kids from a moving vehicle going 70 mph. I also learned some handy crisis survival tips. Did you know that you can survive for up to six months on Cheerios, granola bars and Juicy Juice cartons if you remember to search every crevice in your minivan? 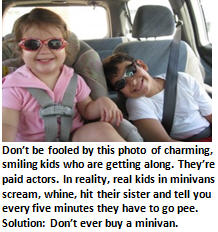 My Hyundai 350 XG (2005) taught me a lesson in frugality. If you’re a male around 50 years of age, you may be planning your midlife crisis right about now. As I stared down the barrel of college costs, I opted for this Korean knock-off of a Lexus sedan at barely half the price. My days of driving boring, boxy minivans filled with kid crap were behind me. Finally, I could enjoy the driving experience once again. I loved my Hyundai sedan.

Um, not so fast. Turns out my elder daughter needs a car for college. So recently I gave her my Hyundai XG 350 in the hopes that someday soon she can discover the joy of replacing four radial tires and an alternator. My wife bought a brand new Hyundai herself – I guess women are allowed to have midlife crises too. So that leaves me with – you guessed it – the old Toyota minivan again, teaching me yet another life lesson: What goes around comes around. I hate that life lesson.

I have learned everything I ever needed to know about life from the cars I have owned – and I am not even talking about what I learned in the back seat (I’ll save that for a future post). In looking back on all the money I’ve poured into cars, gasoline, and repair bills over the years, for the same money, I could have sent both my kids to four years at an Ivy League college.

Ah, who am I kidding? My kids would never have made it into an Ivy League school. Besides, a college education doesn’t come with a sun roof, heated leather seats or an eight-CD Bose stereo system. So I’m pretty sure I made the right call.