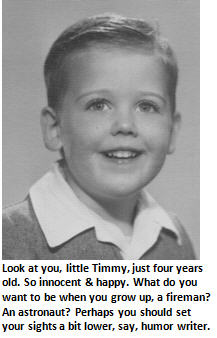 In tenth grade, you’ll do a hair-brained science experiment using boiled linseed oil. The following advice is going to save you about 25 hours of scrubbing black soot from the kitchen ceiling, walls and floor: Linseed oil comes already boiled. It’s highly flammable. (If you don’t believe me, read my previous, I mean future, post on this subject.) 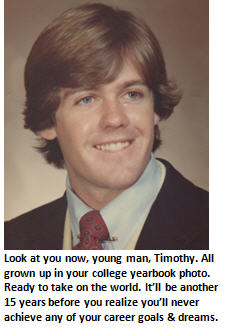 Congratulations, Mario Andretti. At age 17, you’ll finally get your driver’s license – on only your third try.  I hate to be the one to break the news to you, but dad is not going to pony up half the money for our first car. He’s still pissed about that boiled linseed oil experiment. You’ll be tempted to buy that shiny metallic 1967 Chevy Malibu with the dual exhausts and only 137,000 miles on it for $900. What a bargain.

If you ask me, I’d say, pay a bit more and go with the less flashy beige Dodge Dart with 74,000 miles. But if you want to learn how much it costs to replace an alternator, four shock absorbers, a radiator, two dual exhausts, a driver’s side door lock, an antenna, and a car horn, then by all means, buy your gas-guzzling chick magnet. This won’t be your last poorly thought-out impulse car purchase.

In your first year of college, your social life won’t get much better than it was at your all-boys’ high school. You know that cute girl Jocelyn in your astronomy class? You have about as much chance of getting her to go out with you as I have of being elected Supreme Ruler of Kazakhstan. When you ask Jocelyn out in October, she will tell you, “I’m going to be pretty busy until April”. Resist the temptation to be a smart ass by asking her “so how’s your schedule look for May?” Just let it go.

After college, our father, a lawyer, will try to convince you to go to law school so you can take over his law practice. My best advice is not to waste your time and money on three years of law school. You’ll hate it. Trust me on this. You’re never going to practice a day in your life. All you’ll get out of it is $20,000 of debt. And every job interview for the next ten years will begin with this question: “So, tell me, why is it you’re not practicing law?” 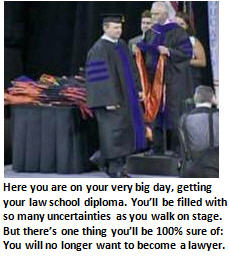 In your twenties, you’ll be driving, with your buddy Todd Beyer riding shotgun. I think it will be a Tuesday. He will goad you into hanging a left onto a one-way street going the wrong direction, arguing it’s a convenient short cut he uses all the time. This would be an excellent time to overcome your congenital need to please everybody and tell Todd to shut the f**k up. There is a cop waiting at the other end of that one-way street, ready to greet you with a $100 ticket. Good luck getting Todd to agree to split the fine.

In your thirties, after working for a high tech start-up that goes belly up, you decide to pursue a career in a more secure, booming industry with a bright future: newspapers. Here’s the funny thing – turns out there’s this technology coming around the corner called the intern– Oh never mind. I’ll let you figure that one out on your own. 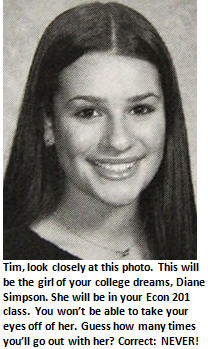 By age forty, you’ll tire of newspapers and once again get the start-up fever. You’ll join a dotcom start-up in which nobody quite understands what the company actually does. You’ll put every spare penny into buying the company’s stock, hoping to retire by age 45.

Here’s a little red warning light: A dotcom start-up that changes its business model every 60 days – and whose motto is Every mirror we sell comes with a year’s supply of smoke  – might be one you want to steer clear of. Your early retirement plans may have to be slightly postponed – until age 75.

Don’t worry, little buddy. You’ll make a lot more mistakes along the way, but I have some good news for you: By the time you reach my age, 59, you’ll be living in Seattle, happily married – albeit to a Canadian (it’s a long story) – and the parent of two high-spirited, beautiful daughters you adopted from China (an even longer story). Amazing. Hard to believe, I know. Who would have thought you’d ever make it to 59!

Tim, it turns out that you’ve not been quite the business wunderkind you hoped.  I also have some sobering news.  In 2014, you’ll have a bald spot and bad knees. You’ll have given up jogging completely. And, for reasons I don’t fully understand myself, you’ll be writing a weekly humor column. But, Tim, it could have been worse. You could have been a lawyer.

Best wishes for a happy future. And trust me about the boiled linseed oil.