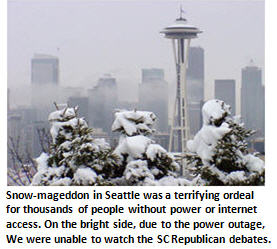 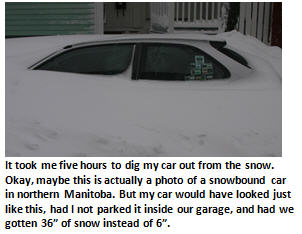 My dangerous death-defying wilderness trek to scavenge for food ended 15 feet after it began. That’s the distance my minivan travelled before I got stuck in the snow. Turns out I had a flat tire. Thankfully, I was a longstanding AAA member, so I called them to fix my flat and tow my car out of the embankment. When I told the dispatcher that I was stuck in my own driveway, I could hear snorts of sympathy in the background as he shared my situation with his co-workers. He told me that during the storm, AAA could only service actual emergencies and that my situation did not constitute an emergency since technically it happened in my driveway. I replied, “How is this not an emergency? How in the world will I ever make it to my yoga class?” But my plea for help fell on deaf ears.

For a period just 58 days shy of two months,  my family was trapped in a cold darkness without power. Then I remembered how sled dogs in the Antarctic would snuggle together to stay warm, at which point my teenage daughter defiantly shouted she would rather die from exposure than be forced to snuggle with her parents. Her bravery was inspiring. Then the home thermostat dipped below 56 degrees. I now understood firsthand what it must have been like for those courageous men led by Scott who died from exposure after reaching the South Pole 100 years ago. Like them, I was now facing a long period of freezing cold, deprivation, and an uncertain fate. So I donned my fuzzy tiger head slippers my daughter gave me for Father’s Day when she was seven (below). Don’t laugh. You do what you have to do to survive. 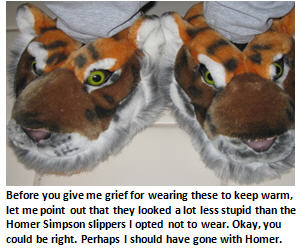 Then the temperature in our house plummeted to previously unheard of levels: 54 degrees….. 53…. 52…. 51 and three quarters… I had no choice. I had to protect my family from imminent death. Barely able to feel my fingers anymore, my mind blurry, I chopped down our heirloom mahogany dining table and threw the shattered pieces into the fireplace. I only wish my wife had reminded me that we had an electric fireplace before I had begun chopping. That was a painful learning moment.

With no electricity and no internet, we looked for ways to pass the time in the icy winter darkness. I lit candles and tried to engage my family in an antiquated custom known as “conversation.”  That’s when I re-discovered that I had a second daughter whom I had completely forgotten about ever since she had discovered Facebook. My, what a lovely young lady she had become. We even played some old-fashioned board games. There was this one game called Monopoly. I had played it several times of course on my iPad, but I never knew they had also made a board game version.

By day three, the snow and ice storms had subsided enough that I valiantly risked venturing out of our cave, in search of internet access. Driving over treacherous roads and getting stuck twice, I finally found safe haven: a Starbucks that had recently regained power. At least 75 people were jammed into every corner of the bistro with their laptops clamoring to get onto the internet. I noticed one chap standing in line without any laptop whatsoever, apparently having come in just for a cup of coffee. What a peculiar sight. 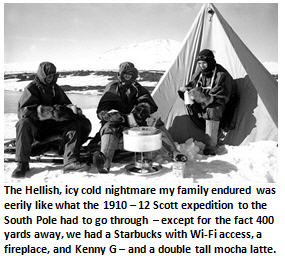 With dozens of people sucking bandwidth from the floundering, overworked Wi-Fi network, tempers flared. One twenty-something fellow pounded his fist on his cushiony lounge chair next to the fireplace, shouting “Damn it, who in the Hell had the nerve to send me an email with a 7 MB attachment?” Before I knew it, people were screaming at their laptops and eying their neighbors suspiciously. Starbucks had turned into a den of crazed bandwidth-hogging, espresso-sipping barbarians. It was time for me to flee for safety before someone amped up on espresso might stab me with a biscotto.

After two days our power was mercifully restored. It would be three more agonizing days before our internet came back online. As I look back on it now, I realize that I learned several things from this arduous ordeal:

I am glad my harrowing near-death experience is behind me. I am a stronger man because of it. Being out of electricity and out of touch with the news was both painful and terrifying. And it leaves me with just one question:  Is it really true that Newt Gingrich is now the Republican front runner? When did THAT happen? You’re pulling my leg, right?