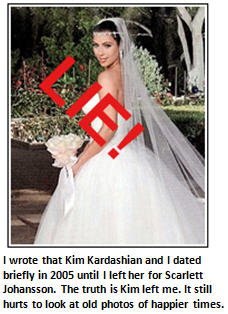 Okay, maybe I make a few things up now and then in this blog. I’m not proud of it. I have decided to turn over a new leaf and come clean about some of my previous false and potentially slanderous comments (with the exception of my previous remarks in which I have publicly questioned the patriotism of actor George Clooney – I stand by those comments).

As a professional humorist, it’s my job to provide illuminating commentary on the important people and events that make the news – like the Florida Boy Scout troop leader who this past week accidentally set his arm on fire – or the recent shocking study that concluded that sex with farm animals can lead to penis cancer. (Both are true stories. I would not lie about things as important as boy scouts and farm animals.)

In my thoughtful commentaries, I often make use of insightful research – unless it takes more than five minutes on Google to obtain this research, in which case I usually just make it up. But, please don’t judge me. I am not the only offender. The fact is that 68% of statistics cited by bloggers are complete fabrications. Okay, it’s possible I just made up that statistic. 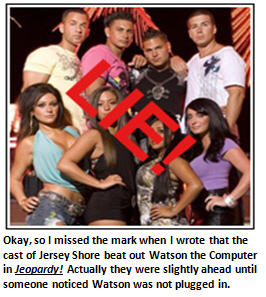 My point is I simply don’t have the time to do actual research and fact checking to support my argument – especially if there’s football on TV, or CSI Miami, or reruns of Everybody Loves Raymond, or any time Herman Cain is making an embarrassing gaffe about the location of an African country on TV – which is approximately 19% of the time – okay, I might have made up that last stat as well.

It’s so much easier just to state an obscure statistic like “37% of boys named Herbert will get the snot kicked out of them before age nine” and then cite some fictitious but plausible-sounding publication nobody will ever bother to look up, like The Quarterly Journal of Pediatric Nameology.

People don’t question even my most hard-to-believe statistics so long as I follow it with an asterisk and erudite-sounding source: Leading economists now estimate our nation’s debt has risen to almost $1,250.* (*Source: Council of Economic Councils for Economic Counseling). Turns out the actual national debt figure is slightly higher – more like $15.03 trillion – so I made a slight rounding error. My bad. Still, as a Pulitzer Prize (deserving) journalist, I accept that my readers deserve better. They deserve accuracy. They deserve the truth. 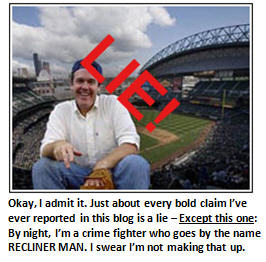 Believe it or not, this blog’s readership is now over 20 million (if you include pets). You were smart not to believe me. It’s actually roughly equivalent to the number of touring golf professionals living in Papua New Guinea. There, it felt good to tell the truth for a change.

Below are a few recent claims I hereby acknowledge might have been prone to misinterpretation on account of the fact they were, technically speaking, bald-faced lies:

LIE: Justin Bieber is the love child of Jessica Simpson and Vice President Biden. TRUTH: I apologize for sullying Mr. Biden’s impeccable reputation with this slanderous claim based on sketchy research. The truth is Justin’s dad is actually House Majority Leader, Eric Cantor. Justin has his dad’s rugged chin, don’t you think?

LIE: President Barack Obama is a Kenyan-born Muslim terrorist hell-bent on destroying capitalism and paving the way for a communist welfare state. TRUTH: O’Bama, it turns out, was born in Ireland.

LIE: Governor Rick Perry is a gifted debater, who will debate circles around the other candidates for three reasons: First, he can boldly claim that Texas ranks 1st in the nation in executions of criminals; second, his confident swagger and plainspoken Texas accent remind us of a recent popular president; and third… Um, er…. Um… TRUTH: There is no reason #3. 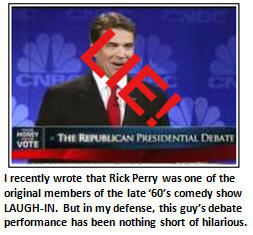 LIE: Kim Kardashian’s recent marriage to NBA second-stringer Kris Humphries, which lasted 72 days, was a lame publicity stunt concocted to prop up Kardashian’s brand and get all the magazines and cable news shows talking about her ad nauseum. TRUTH: Lame? Are you kidding me? It was a BRILLIANT publicity stunt.

LIE: Lindsay Lohan, fresh from her latest stint in rehab was arrested for possession of cocaine while on the movie set of her latest blockbuster horror film. TRUTH: Lindsay Lohan has never been in a horror film – unless you count Herbie, Fully Loaded.

LIE: Arnold Schwarzenegger, married to the stunning beauty Maria Schriver, secretly had a child out of wedlock with a homely middle-aged maid. TRUTH: A complete fabrication. I can’t believe anyone actually fell for such an outlandish tale. I simply made up that story to get back at Arnold for not appointing me California’s Secretary of Agriculture. 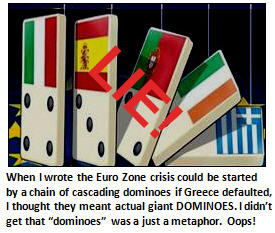 LIE: Herman Cain made repeated sexually inappropriate advances to Michele Bachmann during the Republican Presidential Debates. TRUTH: He did no such thing. His advances were aimed at Newt Gingrich, whose Hai Karate after shave Cain found provocative and alluring. Bachmann was just in the way.

LIE: The top 1% of Americans own more wealth than the bottom 95%. TRUTH: While technically that statement I wrote was true, it was grossly misleading, as this percentage is before factoring in the cost of chauffeurs, live-in chefs, mistresses named Cinnamon and personal trainers. Once you include these costs, the top 1% only own more than the bottom 92%. 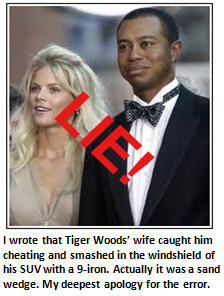 The above examples are just from last week’s post. But I am turning over a new leaf. Never again will I publish false statements or fabricate bogus statistics just to impress readers. That’s a pledge I make to all 20 million of my loyal readers (and their pets), just like I promised President Obama (another avid follower of my column) when he invited me to the Oval Office this past week to discuss my upcoming trade mission to his Irish homeland as his newly appointed Secretary of Humor Affairs. I’ll be traveling on Air Force One – with Hillary, oh, and my new bride, Cameron Diaz. I hear the in-flight fruit & cheese platter is to die for.

That’s the view from the bleachers. Perhaps I’m off base. But I would never lie about it.