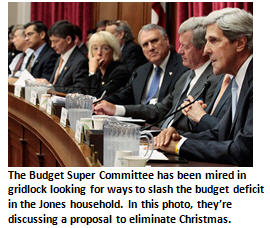 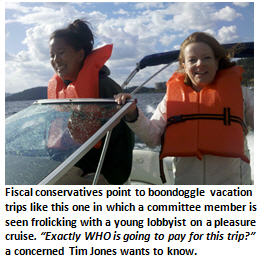 “If you look at my opponent’s position, the challenge seems simple: ‘Raise revenues’. We all know that’s just code for ‘Stop blogging and get a respectable job like mine.’ If only it were that easy,” Mr. Jones told reporters while at the controls of his X-Box game console where he had just completed Level 8 in Call of Duty 4.

“The long-term solution must center on significant cost reductions, starting with my esteemed colleague’s plans to spend $900 replacing our 14-year old washing machine, which died last weekend. This is the kind of frivolous, out of control spending that simply must stop.”  Mr. Jones went on to point out his opponent’s longstanding fiscally irresponsible pattern of donating to African famine victims as another example of misguided bleeding-heart liberal spending on people who refuse to pay a dime of U.S. income taxes.

Mr. Jones’ biggest entitlement target is America’s private education system. “Have you seen the cost of four-year private college or an out-of-state education?” Jones snapped to reporters during a recent Tuesday morning bowling outing with drinking buddies. “Who’s going to pay off the $60,000 of debt per child after four years? I don’t have that kind of money lying around – that money is earmarked for a new Lexus when I retire.” 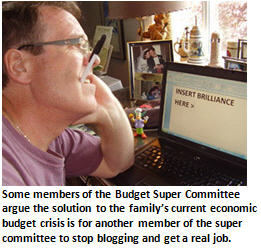 Mr. Jones’ arguments have been met with stiff opposition, thanks in part to heavy lobbying by special interest groups, including his younger daughter, who has her sights set on Dartmouth. “My dad was able to go out of state for his college. The least he can do is pay for me to attend Dartmouth or at the very least Northwestern – oh, and buy me a car,” she said at a recent press conference held at the fragrance counter of Abercrombie and Fitch clothiers.

Another vocal lobbyist, their elder daughter, has argued strenuously against Mr. Jones’ proposed cost-cutting plan to lay off the once-a-month cleaning lady. “You can’t do that,” she shouted at a recent protest rally she staged in the family’s dining room. “You’re letting the cleaning lady go? Have you no compassion for the working class? I suppose you’re going to make me clean the bathrooms now, aren’t you? It’s so unfair!”

Negotiations heated up in recent weeks, with fiscal conservatives on the budget committee calling on their opponents to broaden their vocabulary to include words like Payless Shoes, and arguing that flu shots for the kids are a wasteful extravagance. Meanwhile, protestors on the other side of the aisle staged a sit-in in front of Jones’ laptop, chanting “Stop the blog. Get a job!”

Despite increasingly acrimonious rhetoric in recent days, there had been hopeful signs of a breakthrough in the talks. The budget committee’s fiscal conservative chair, Mr. Jones, indicated he would be willing to consider posting his resume on Monster, while the committee’s leading liberal member, Ms. Jones, hinted she’d be willing to reconsider her previous steadfast refusal to walk to and from Costco for groceries instead of driving, as a way to lower their monthly gasoline expense. And in what was seen as an encouraging gesture of bipartisanship, both sides agreed to cut back their Netflix subscription plan from three videos at a time to two. 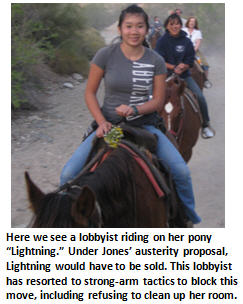 Knowing that the time for a compromise solution was running out, leaders on both sides of the committee agreed to marathon late night bargaining sessions in which Ms. Jones passed up her weekly aerobics and Pilates classes at the gym in return for Mr. Jones agreeing to give up watching episodes of The Daily Show and Conan. (He decided to TIVO them instead.)

In the final days, it once again appeared a stalemate was inevitable. Mr. Jones refused to eliminate the premium sports package on their cable TV plan, passionately proclaiming to a gathering of poker buddies “Give me NFL All-Access Channel or give me HBO.” In response, Ms. Jones countered by digging in her high heels and refusing Mr. Jones’ strident demands to downscale their monthly family dinner night out by replacing Red Lobster with White Castle, telling soccer mom supporters in her minivan carpool, “What are we, barbarians?”

As the clock’s final minutes ticked towards the previously agreed upon deadline, it appears a last-minute compromise has been reached. As a result, draconian automatic budget cuts requiring the cancellation of yoga classes and spring soccer camp and turning down the thermostat to a frosty 63 degrees at night have all been temporarily averted.

Details of the plan have not been disclosed but are believed to center on an agreement to attempt to raise the couple’s VISA credit card limit from $7,000 to $15,000, opening up a Best Buy charge account so they can purchase that flat screen 46” HDTV Mr. Jones has had his eye on, and postponing any further deficit reduction talks until after their Hawaiian vacation in February.