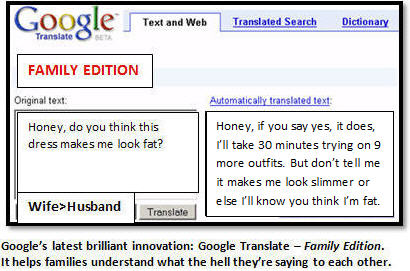 When you think of Google, what’s the first thing that comes to mind? In my case, it’s the fact that I’m still kicking myself for not listening to my day trader buddy Rocco, who told me back in 2004 to buy 500 shares at $45.

But the second thing that comes to mind when I think of Google is this: innovation.

Among Google’s most impressive innovations is Google Translate, which lets you translate a phrase from one language into any of more than sixty other languages – even Latin – which comes in really handy if you’re considering becoming say, the Archbishop of Kent.

Imagine you’re in France on a business trip and you’re hungry. Google Translate will take this English expression: I am very hungry. Let’s go to McDonalds so I can order a Happy Meal. 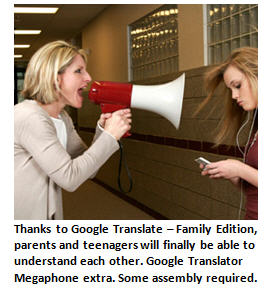 Or Chinese, Turkish, Polish, or Swahili.

Now Google has taken translation to the next level with Google Translate – Family Edition. For years, parents have tried to communicate with their teenagers about the importance of cleaning up their room, only to have their words misunderstood, as if spoken in some incomprehensible ancient Gaelic dialect.

Frustrated wives have pleaded with lazy husbands to put down the remote and rake the leaves, wondering how it is that their plain English words apparently convert into Greek in their husband’s brain. But in fairness, can you blame us, ladies? Our team is only down by three points with 1:37 remaining and we have the ball on the other team’s 17-yard line. Be reasonable.

Google Translate – Family Edition (GTFE) comes with several convenient translation options: Husband to Wife; Wife to Husband; Parent to Child; Older Sibling to Younger Sibling, and my own favorite, Owner to Dog, to name just a few. Let’s look at how it works: 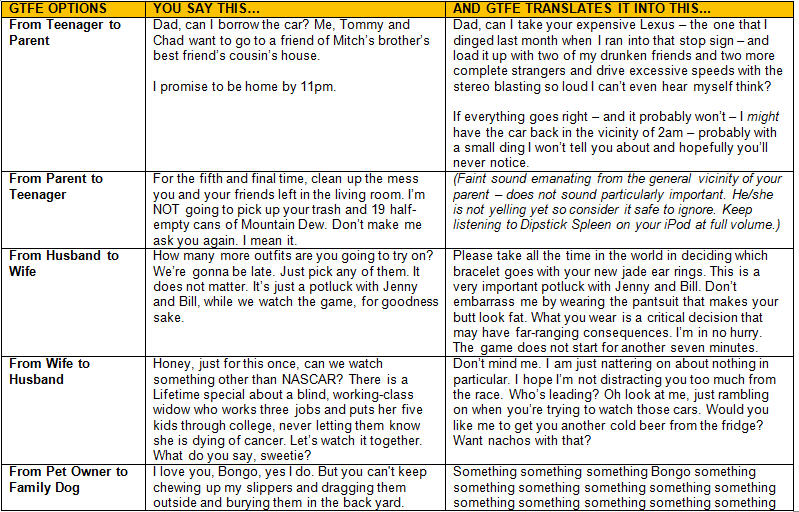 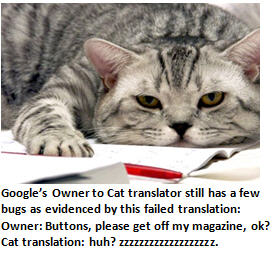 Google is reportedly still working on an Owner to Cat edition but so far, everything seems to translate into the same output: I have no interest in what you’re saying.  Please just shut up and pat me now.

Personally, I am just hoping Google will come out with a body language version that translates my teenage daughters’ eye rolls into phrases I can understand. I think that’s coming out in the next release. I’ll keep you posted.

That’s the view from the bleachers. Perhaps I’m off base. Or as they say in Danish, Det er udsigten fra bleachers. Måske er jeg off base.