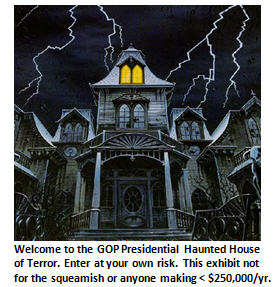 Watch where you’re going or you might stumble right into the most terrifying exhibit of all: Rick Perry’s Texas Chainsaw Execution Chamber. You gasp in horror as the Texas Terminator ghoulishly gloats that he has executed more visitors than any other state’s haunted house. Just pray you don’t have a speeding ticket from Texas or you may not make it out of this chamber alive. 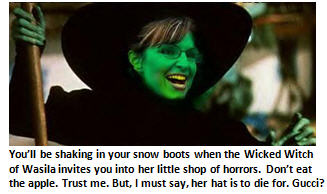 By now, you’re no doubt feeling hopelessly lost – a bit like presidential hopeful Rick Santorum. The way out of this nightmare is to just keep veering further to the right. But don’t go too far or you might just end up at the extreme rightwing fringe of this house, trapped in the Wicked Witch of Wasila’s Little Shop of Horrors. You are grossed out by the display of mauled, dead carcasses of elk, polar bears and any member of the Alaskan state legislature who ever dared to cross her. Run like hell. This Devil wears Prada, and Gucci, and Versace, and Armani.

As you race down the hall, vainly searching for an escape, your heart is pounding. Uh oh. You made a wrong turn to the left. Now you have no choice but to hurl yourself into the Tea Party Town Hall of Torture and its grotesque Gauntlet of Morons. Try not to get trampled to death by the mob of crazy lunatics with glazed looks in their eyes, carrying pitchforks, torches and mangled protest signs like “Stop Youth in Asia!” The way this mob butchers the English language is shocking.

If you’re lucky enough to make it through the Gauntlet of Morons, soon you find yourself completely confounded and confused. You’ve lost your way and find yourself inside Mormon Mitt’s Morbid Maze of Mirrors. Mitt seems to be over there on the left. No wait, that’s him over there on the right. How can he be on both sides? Who knows which one of these illusions is the real Mitt Romney. One thing’s for sure; whichever one it is, he has fiendishly perfect hair. 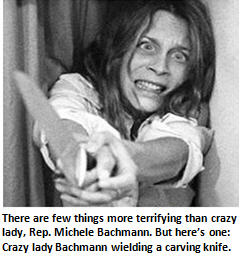 As you climb the rickety stairs to the attic, you hear howling sounds of despair as other frightened GOP House of Terror victims, er, visitors, watch in horror as their 401K’s suddenly vanish into the moonlit night. At the top of the stairs, watch your step. Suddenly, you’re awestruck by the alluring vision of a pot of gold and retirement savings you’ve long dreamed about. But it’s an illusion. Only the Werewolves of Wall Street get to keep their pots of gold. The other 99% of visitors will be left wondering what happened to their investment portfolios and property values.

The next instant, you feel your financial footing slip out from under you as you plummet through the Trap Door of Credit Default Swaps, landing with a thud in the dark, dank Dungeon of Debt. Hope you don’t get injured in the fall, because in this haunted house, there is no healthcare coverage. The only doctor in this house is Doctor Frankenstein, oh and his side kick, Dr. Ron Paul, better known as the Doctor of Doom.

As you try to make a break for the nearest emergency exit, don’t stare into any cracked mirrors, and beware of one seriously menacing, bad ass black cat named Cain. This cat doesn’t have just 9 lives. He has 9-9-9 of them.  And unless you’re rich enough to own a pizza chain, you don’t want this black cat anywhere near a white house. 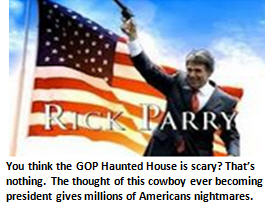 If you enjoy being terrified by shocking images of impending disaster, then you won’t want to miss the GOP Halloween Haunted House of Terror. Soon the GOP will be taking this fright night freak show on the road with stops in Iowa, New Hampshire, Florida, and beyond.

Sounds like there will be plenty more opportunities for bloodcurdling screams of horror, now that this presidential political campaign of terror has just begun. And that’s a scary thought.

That’s the view from the bleachers. Perhaps I’m off base. Oh and one more thing: Boo! Happy Halloween!