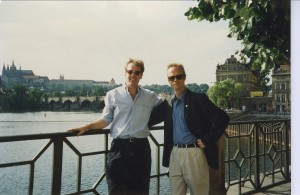 October 14, 2011 – Starting today, 16 months after it first debuted as a regular feature of Tim Jones’s humor blog View From the Bleachers, the blog’s popular weekly column Fishful Thinking is finally getting its own website at the address www.fishful-thinking.net.

“It’s been incredibly kind of Tim to let me crash on his website for the past year and a half while I dithered about getting a place of my own,” says columnist Steve Fisher, “but I know it’s time for me to stop procrastinating and start taking personal responsibility for my so-called humor.”

“Besides,” Fisher notes, “these bleachers are getting sort of filthy with hot dog crumbs, popcorn, spilled beer, and jokes about being married to a Canadian.”

Jones, the straight-A Capricorn student, and Fisher, the straight-C Sagittarian jokester, were a seemingly odd couple for a lifelong friendship. But, from the very first moment they met, their bond was sealed by a serendipitous coincidence: Jones’s strict, strait-laced, right-wing upbringing proved the ideal fodder for Fisher’s witty, withering and ceaseless mockery of him, a combination which usually led to both of them rolling on the floor in convulsive laughter.

Throughout this period, Fisher and Jones managed to maintain a constant humorous exchange utilizing an archaic and time-consuming hand-written long-distance communications technology which is now almost entirely unfamiliar to today’s “ADD-led” generation of posters, texters and Tweeters.

During the early ‘90s, Fisher and Jones – then based in New York and Philadelphia respectively – simultaneously came to the same conclusion: that the geographic distance between them was beginning to put a strain on their friendship. Seizing upon that trend, Jones decided to move a further 3,000 miles west to the city of Seattle, Washington.

Fisher, left with no choice but to go east, was faced with either wading out into the Atlantic Ocean and drowning or else traveling all the way to the European continent. He ultimately chose to double down on Jones by relocating 6,000 miles eastward, which inadvertently landed him in the depressed former Soviet-bloc country of Czechoslovakia.

“Dear Tim,” Fisher’s first letter to Jones from his new post-Iron Curtain home began. “Hope you’re enjoying your mocha frappuccino there in Seattle. I’m drinking my third cup of some cold, coffee-like Czech beverage which I had to strain through an old sock.”

Despite their mutual lack of a coherent life plan and any semblance of marketable skills, Fisher and Jones managed to successfully stumble through the next couple of decades, with a number of eerie parallels in their otherwise divergent paths. Both married foreign nationals, of surprising attractiveness given the two men’s own hideous appearances. Both became the fathers of two children whose birth nationalities begin with the “ch” sound (spelled “cz” in Fisher’s case). Both became early risers – not out of any particular enthusiasm for life, but simply out of the urgent necessity of emptying their aging, shrinking and bursting bladders.

Together they also consumed the average per person share of caffeine, tobacco, marijuana and methamphetamine (with Fisher covering Jones’s share) as well as sugar, chocolate, fast food and packaged snacks (with Jones covering Fisher’s share).

Tragedy struck in the spring of 2009, when a lethal bacteriological infection left Fisher in a septic shock-induced coma which required the amputation of his extremities in order to save his life. Overcome with compassion for his friend’s suffering, Jones immediately reached out to Fisher by adding him to the blind e-mail distribution list for his recently launched humor blog, View From the Bleachers.

After allowing a reasonable time for Fisher to regain consciousness and come to grips – so to speak, heh-heh – with his new amputated state, Jones reached out again, this time in a personal e-mail, writing, “Hi, Steve. I heard that you lost both of your legs, your left hand, and all but one finger on your right hand. Wow. That’s wild! Hey, would you like to contribute something funny to my new humor blog View From the Bleachers?”

In his heavily narcotized state, and lacking the ability to move, Fisher was unable to respond to Jones’s request directly, but managed through an intermediary to order the services of a freelance Russian assassin to head for Seattle on his behalf. Before the hit man could complete his assignment, however, Fisher somehow regained his sense of humor enough to write and publish his first post on Jones’s blog, a guest column entitled ”I Agree”.

And, thus, Fishful Thinking was born, or rather re-born, as a humor column under that name had already been written by Fisher for his and Jones’s high school newspaper, the added witticism then being that a fish was also part of the school’s official symbol.

Fisher credits Jones with helping to restore his will to live and to laugh after his debilitating near-death experience. “When I woke up from that coma, and the doctors told me what they had had to do to my limbs, I thought that my life was over,” Fisher notes. “But almost as soon as I was able to talk, Tim started calling me repeatedly, trying to boost my spirits, telling me how much he loved me as a friend. While I had been unconscious on life support, he had stayed in close touch with my terrified wife and had mobilized every person he knew to wish and pray for my survival. And he has faithfully Skyped me for a video chat every week since I was released from the hospital.”

“If you want to know the answer to the question, ‘What are friends for?’” Fisher concludes, “all you have to do is ask me, because my friend is Tim Jones, and there never will be a better one.”

Fisher has one final request to residents of the Seattle area: “If you meet a large, foreign-sounding man named Oleg, please tell him for me that it’s a ‘no-go.’”