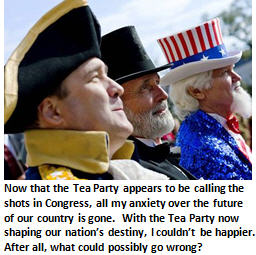 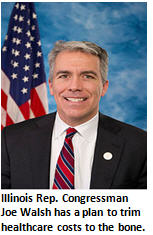 Tea party Congressman Joe Walsh has a plan to streamline our healthcare system. His plan will eliminate over $3 trillion in waste and bureaucratic red tape by simply eliminating our healthcare system once and for all. His plan will replace it with faith healing, tongue depressors, and in emergencies, leeches. Under his visionary plan, all hospitals will be shut down and re-opened as jazzercise centers. The elderly and the disabled will no longer have access to Medicare or Medicaid, but they will be invited to participate in outdoor tai chi sessions just like they do in China (and look how old they live to be over there). 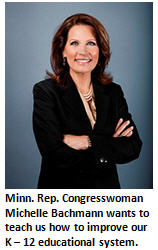 These clerical jobs, formerly known as teaching positions, will be replaced with a series of audio cassette tapes soothingly narrated by noted historian Glenn Beck, covering more than 25 different subjects. Popular courses will include Mad about America, Gun Rights for Seniors, Why Islam is Wrong, The Evils of Nationalized Healthcare, The Perils of European Socialism and Acting French, Just Say No to being Gay, and my own favorite, Christian Extremism for Kids. (Cassette players and AA batteries not included.)

The centerpiece of Bachmann’s plan will be a complete ban against all government subsidizing of higher education, thereby making a college education unaffordable to everyone except for Mitt Romney’s grand children. Earlier today, Rep. Bachmann told a gathering of people dressed up like Uncle Sam, “By making college unaffordable to all Americans, we will save every American family thousands of dollars in wasteful college tuitions and low nutrition college meal plans. Besides, there are no jobs for college graduates these days anyway so why waste your money?” 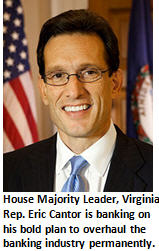 Tea Party Champion and House Majority Leader Eric Cantor plans to solve our banking industry crisis by eliminating all state and federal banking regulations of any kind, reversing decades of complicated pro-consumer protections that nobody understood in the first place. His plan will remove the unfair, oppressive regulatory safeguards that, had they ever actually been enforced, would have limited investment banks like Morgan Stanley to merely 35% year-over-year profit gains.

Cantor, speaking before a group of women dressed up as Betsy Ross, went on to say, “Just think of the thousands of trees that will be saved by eliminating millions of pages of needless banking regulations nobody but bank attorneys understand. No wait. That sounded kind of pro-environment. Ignore my previous statement.”

On the rumors of his new plan, Goldman Sachs’ stock went up 36% overnight, and the firm’s top 2,000 executives were each awarded $500,000 bonuses when the firm was unable to figure out what else to do with all that money.

But wait, there’s more. Stay tune for next week’s conclusion of this important two-part post, in which I save the very best ideas for last. You will be amazed at just how innovative and “out of the box” our Tea Party advocates can be. Don’t miss it.

I have to go. I want to be sure to get a good spot for my town’s Save America rally. I just have to put on my patriot costume. For the life of me I can’t seem to remember where I last put my musket.