My triumph over overwhelming adversity 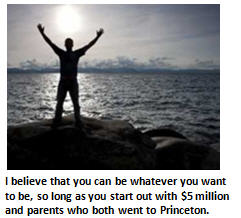 As I look back upon my life thus far, I realize just how blessed I am. Two wonderful daughters, a talented portrait artist wife, living in a gorgeous city (Seattle). But you know, it wasn’t always this way. My life story has been fraught with challenging and perilous obstacles at almost every turn.

Much like Jesus, I had a very humble origin. Like baby Jesus, I too was born in a little town called Bethlehem (just outside of Albany, NY). My childhood home, while not quite a manger, was rustic in its own way. While we did not have sheep like baby Jesus, we did have a sheepdog, at our 3,700 sq. ft. suburban split level five-bedroom house. I missed out on the simple joys of attending a public school. Instead I had to be bussed 20 minutes away to an all boys’ prep school for grades 1 through 12. I rarely got a window seat on the bus. But it made me stronger. 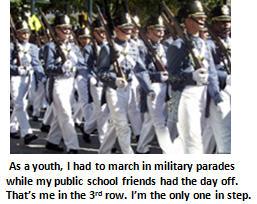 I was forbidden to wear colorful shorts, fun t-shirts or high top sneakers to school. Every day I had to wear the same dull grey uniform with a black tie. It was a military college prep school. Every year, I had to march in the Veteran’s Day Parade while the public school kids all had the day off so they could come to the parade to mock me. But I never complained about the injustice of it all. I reminded myself about all the kids in Africa, Bangladesh and New Jersey who had even less than I had.

Growing up the fourth of five children was a challenge that no child from a two-child or even a three-child family could possibly comprehend. I constantly had to scratch and claw for my parents’ attention just to be fed (a second helping of cheesecake dessert). At times, life at my almost exclusively white private school could be harsh – even cruel. I remember 4th grade, when they were picking teams for dodge ball. Fifteen boys heard their name called before mine was shouted out.  Only two kids were picked after me – Sydney Bookstein and Andy Zembroth, and I don’t need to tell you what hopeless losers they turned out to be.

And every Friday for 12 years, they served the same school luncheon entrée – filet of fish. I always hated filet of fish. Did it break my will? No, although the same could not be said for Sydney or Andy. More than once I recall begging my parents to let me bring a PBJ sandwich to school on Fridays, but they always refused – one of many examples of my parents’ tough love. Yes, I’m a stronger human being as a result of these tribulations of my youth. 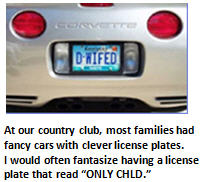 I realize now that the countless hardships of my childhood were merely life tests I needed to face and conquer. With each test, I grew closer to becoming the mature, thoughtful adult I hope to eventually become by my retirement.

Like the time in 6th grade, when I learned that our parents had joined an upscale country club – the kind where every car in the parking lot was a Mercedes with a vanity license plate like “HARVRD” or “SPINNAKR” or “DR MPLANT”. But then the truth leaked out: My parents – whose car stood out with its unoriginal license plate name 609-WQR – could only afford the golf basic golf membership, but not the Gold Club tennis membership. I won’t lie to you. It came as a crushing blow to my dreams of becoming a tennis professional by the age of 14. I cried my way through many a round of golf that summer.

In 4th grade, I broke my left wrist in a tragic skateboard mishap the day after school ended for the year, and the cast did not come off until the day before the start of 5th grade. (True.) Talk about a lost summer. Most kids could have easily collapsed into a downward spiral of self-pity and completely given up on life. But not me. Despite my plight of chronic itching, I refused to give up on my dreams of life after a cast. It seemed like years, but eventually, six weeks later, the cast came off, and I taught myself how to regain the use of my left arm.  It wasn’t easy. To this day, I get squeamish at the sight of a skateboard, however. 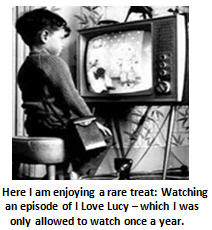 Every year throughout my childhood, my parents pushed me to the brink of child abuse by requiring me to do an endless list of chores before I could go out and play. I didn’t experience the joy of color TV until my 8th grade. I was limited to one hour of TV per week. I was forced to choose between Bonanza, Ed Sullivan and Gunsmoke. No child should be forced to make such a gut-wrenching decision like that.

During my youth growing up in the 1960’s and ‘70’s, my parents never once offered to buy me a cell phone, a DVD player or an iPod. There’s no denying that my life was tortuous in the best of times. But I reminded myself that the pain of being denied my own rock ‘n roll drum set and a gas-powered go cart in 8th grade would someday make me more appreciative of what I did have. Looking back, I am thankful to my parents for refusing to give in to my incessant demands to buy me a pony for my seventh birthday. The purple bicycle with the banana seat and flame decals they bought me instead was way cooler.

As I said, I attended a military prep school. And while I was not old enough to serve in Vietnam (the war ended before I graduated), I was required to wear a uniform to school every day. I had to march in parades with guns, shine my shoes daily, learn to shoot a rifle and read a topographical map. So if you ask me, what I endured was pretty much the same thing as serving in war-torn Vietnam – just without all the North Vietnamese shooting at me or worrying about being blown up by a landmine or having to sleep in tents or eating dried rations of prunes and hash from a can or being in a jungle 15,000 miles from home or wondering if today would be my last day on this planet. But otherwise, my military school experience was pretty much the same as ‘Nam. 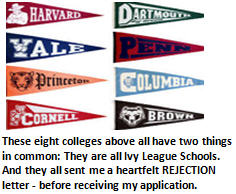 Life didn’t get any easier after high school. Only 25% of the kids at my prep school got accepted into their first choice Ivy League college. Sadly, I was not among the lucky 25%. I had to endure the embarrassment of attending the lowly University of Virginia and later the further humiliation of pursuing a combined graduate degree program from The Ohio State University. I refused to let this severe lack of an Ivy League post-graduate medical school education stop me from chasing after my shattered dreams.

In 1983, I met my future wife, Michele. Four years later we were married. As much as I adore my wife, it’s been no picnic. You see, my wife is – how can I put this delicately – well, she’s a Canadian. This presented a complicated array of delicate cultural obstacles for me to navigate. The Canadian culture is so hard to comprehend. They misspell half their words – like “colour”, “labour” and “centre”– and mispronounce the rest with that annoying, vaguely British-sounding accent. For our first five years of marriage, most of the time, I had no idea what she was even talking about as she used words like “chesterfield” (couch) or “serviette” (napkin) or “runners” (sneakers) or “behaviour” (behavior). I would nod and smile as if in agreement, when deep inside, I was hopelessly confused and sometimes, frankly, more than a bit worried for my own personal safety. 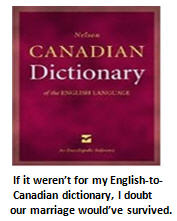 For years my wife clung to her archaic, anti-American Celsius temperature scale. And don’t get me started about her stubborn adherence to the metric system. It almost cost us our marriage. But together, we fought through it and are a stronger couple as a result. I refused to let my wife’s alien ways tear our family apart.

More recently, I have had to endure living in a city that has absolutely the worst professional sports teams of any city in the nation. We lost our basketball team altogether as they packed up and moved to Oklahoma City. And our major league baseball team lost more games than any other team last year. Despite all of this pain and sadness, I have learned to accept there may be more to life than ESPN SportsCenter (although frankly, I am not quite sure what that would be).

So, as you can clearly see, my life journey has had more than its fair share of adversity and ordeals through which I’ve had to battle. But please don’t pity me. With each new trial, with each new experience of grief (like when I heard that Steve Carell was leaving NBC’s The Office), I found an inner reserve of strength and resolve that pulled me through the traumatic heartbreaks, leaving me stronger than before. I have put some of my insightful life lessons into my new book entitled If you can dream it, you can be it (so long as you have affluent parents with connections). Now available in paperback.

I’m not out of the woods yet, however. I still confront difficult challenges almost daily, which force me to face my fears and fight through them. Just the other day, I discovered that my TIVO had failed to record the season finale of Dancing with the Stars. I’d been looking forward to that for weeks. It was a crushing disappointment. How will I overcome my grief? I don’t know yet. Perhaps by watching a marathon of old Frazier episodes on Lifetime. Somehow, the experience will make me stronger. And in the end, I will triumph once more.