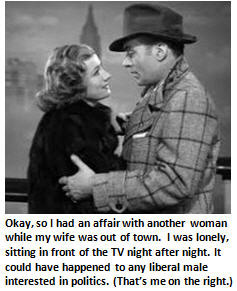 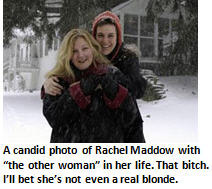 I knew from the outset that this torrid affair could never last – what with the distance between us and the fact that she is gay and already has a partner of her own. I knew it was wrong the moment I started seeing her. All my conservative friends have condemned me about my obsession with this woman. But while my wife was away, I just could not stop wanting to see her – night after night after night. I am, of course, talking about Rachel Maddow, who has her own show on MSNBC. I know it was wrong. Heck, my older daughter shares her first name – how creepy is that!

But if you knew Rachel Maddow the way I have come to know her these past two weeks, you might have fallen too. You see, Rachel is a Rhodes Scholar, having attended Stanford University before going on to obtain her doctorate at Oxford University. She is a political analyst, and to my smitten mind, the most eloquent, brilliant and clear-thinking political journalist on television today. 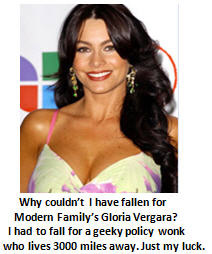 But what drew me to this woman like a starving puppy to a steak bone is that Rachel, like me, is just a skosh to the left of the political center – sort of like how Barrow, Alaska in February is just a skosh bit colder than Death Valley in July. I had so many women on my TV dial that I could have fallen for – Kim Kardashian, Desperate Housewives’ Eva Longoria or Modern Family’s Sophia Vergara (left) – so many fine-looking women who could have swept me off my feet. But no, my mind fell for an academic policy wonk with horn-rimmed glasses named Rachel.

You see, I love to follow politics – a sickness perhaps – and the current debt ceiling – default crisis debate has me riveted. I have found myself hopelessly addicted to my 9pm private time with Rachel every weeknight. I have no idea how I am going to explain this secret passion to my wife. You see, my wife prefers watching National Geographic Channel shows about the Arctic Tern’s migration patterns or six-part documentaries about Mary, Queen of Scots, or NOVA episodes explaining in excruciating detail the physics behind flying buttresses in the design of cathedrals in 15th century France. If she ever finds out I have been obsessively watching Rachel Maddow night after night, how will I ever be able to explain it?

Please, let’s keep this sordid affair our little secret, okay? My wife doesn’t need to know. She never reads this blog. So as long as you don’t blabber, I’m pretty sure I’m safe. Still, my conscience is eating away at me. 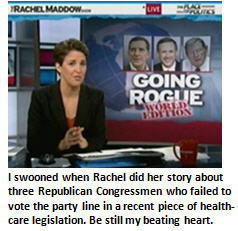 Don’t get me wrong. I love my wife. It’s just that my wife can’t fulfill my need for CNN-Wall Street Journal polling data comparing voter sentiment on immigration reform segmented by socio-economic group and educational level, or arcane dissertations comparing the underlying market dynamics of the 2008 stock market crash to the Dutch Tulip market crash of 1637 the way Rachel can explain it. And when Rachel did that scathing assessment of presidential candidate Michelle Bachmann’s ill-conceived plan to address our current potentially catastrophic impending credit default crisis, well, Rachel, you had me at “buffoonery.” You had me at “buffoonery.”

If you are not familiar with Rachel Maddow, and you are a liberal, just one viewing of her show and you will see why I have fallen head over cerebellum for this incredibly smart woman. If you are a conservative, you might not see what I see in her, but I invite you to check her out – unless you are a member of the Tea Party, in which case you won’t understand a thing she is saying because she uses a lot of multi-syllabic words and phrases like “international monetary fund” and “currency devaluation”.

My wife and kids are returning from their vacation this evening. I am in a panic. You see, my wife also is very smart – and the jealous type. I fear she will notice something suspicious that I may have failed to cover up – like the fact that every TV in the house is set to MSNBC. If she checks my email, she may see my fan mail emails to Rachel@rachelmaddow.msnbc.com. Maybe she will notice that I’ve become a Twitter follower of Rachel Maddow or that I have become a FAN on Facebook. I just know I am going to trip up somehow unless I break off this affair immediately. 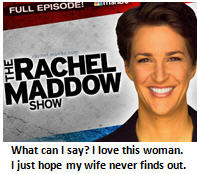 There is no way my wife would ever be willing to share me with this other woman, even if it were just for one hour a day. I am going to have to walk away from my obsession with Rachel Maddow right now. I plan to start watching episodes of COPS or, better yet, something with absolutely no redeeming intellectual value, like FOX News, in order to get this brilliant woman out of my mind.

It was exciting while it lasted. But I can’t let this ruin my marriage. I am simply going to have stop watching the Rachel Maddow Show once and for all. It will be painful to do, but my marriage depends on it.

Besides, I can always catch her show online after my wife goes to bed. And nobody needs to know.

That’s the view from the bleachers. Perhaps I’m off base. But please don’t tell my wife.