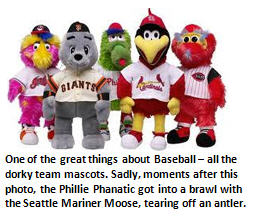 I know what many of you are thinking – baseball is the most boring sport imaginable. One detractor filmed a nine-inning baseball game and concluded that there were only 17 minutes of actual action in a typical 2.5 hour game. So before I give you all the compelling reasons why baseball is better than having sextuplets, let’s start with the opposing viewpoint.

WHY SOME IGNORANT PEOPLE HATE BASEBALL

Some people just don’t get the appeal of what has been called America’s Pastime. Here are some of the jaded complaints they level at this unique sport:

Baseball is deadly dull. It takes forever for anything to actually happen. It’s true, most city councils could pass a sales tax ordinance in less time than it takes a relief pitcher to warm up. To support their claim that the sport is a tad bit dull, below is a graph that breaks down the relative proportion of the time devoted to the most important aspects of a typical baseball game: 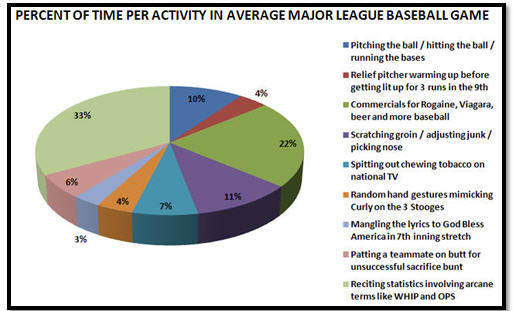 The baseball season is interminably long. It seems to last 12 months. Players report for Cactus League ball (pre-season) in early February, which runs through March. The season starts on April 1 and runs six months. The playoffs start in early October and wrap up with the World Series in mid-November – leaving a long stretch of almost 10 weeks where there is no baseball at all. No wait, I forgot about winter ball. Yeah, it’s pretty much year round. 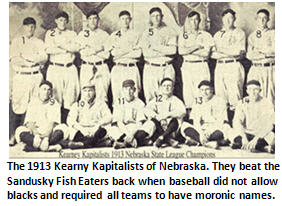 Baseball teams have the lamest names. This criticism tends to be leveled in particular at minor league baseball teams or teams from yesteryear. Here is a small sampling of actual baseball team names throughout history (none of these are made up):

Okay, so they have really lame names. But did you ever see the Clamdiggers in action during their heyday? Their starting rotation was nothing short of Clam-Tastic!

“You know, Brad, that the Mud Hens’ relief pitcher, Willie Walkabatta, leads the league in wild pitches in night games in which fewer than four runs have been scored when the opposing lineup has 5 or more right-handed Puerto Rican batters who grew up in homes without fathers.”

“No, Earl, I did not know that. But did you know, Earl, that their second baseman, Freddy Foulsalot, is second in the league among left-handed batters with speech impediments in steals when there are less than two outs in stadiums with retractable roofs?” 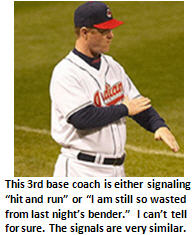 “Of course, Brad. Everyone knows that.”

All the real team sports have game clocks. Baseball has no clock. What’s up with that? That’s because baseball is such an old sport it was invented before people could tell time.

All those cheesy fan incentives to get people to come to the park. No sport comes close to baseball in their campy fan giveaways to pack people into the stands. You know the deal: “The first 5000 fans will get their own Alex Rodriguez bobble head.” (Personally, I prefer the pre-steroids A-Rod bobble head to the steroids edition.)

I once went to a minor league ball game in which they gave out free Groucho Marx nose glasses to every fan (true). Personally, I thought the Florida Marlins’ idea for Vuvuzela Night from a few years ago was a brilliant move. (Click here to listen to all the fun – and be sure to turn up your speakers for the full fun effect). But perhaps the Lebanon Pretzel Eaters (I swear I’m not making up that name) might have missed the mark with their Garter Snake Night., which resulted in an unexpected stampede. Probably should have thought that one through a bit longer.

The Infield Fly Rule – Will SOMEONE please explain it to us? Sorry. Can’t help you there. Even scientists and academics are at a loss to explain what it is or why it was created.

WHY BASEBALL IS THE GREATEST SPORT 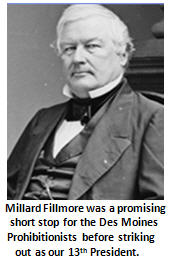 Admittedly, baseball is not very sexy when you compare it to the thrills and crashes of NASCAR racing, the nail-biting tension of hockey, or the brute physicality of Lingerie Football. But it’s my sport. I love all the obscure statistics, the lame dancing mascots, the smell of roasted peanuts, the hackneyed bloopers reel, and all the corny traditions of this 170- year-old game.

And, yes, like all patriotic Americans outside the five boroughs of New York, I love to hate the Yankees.  I’ll continue to root for my hapless Seattle Mariners in their perennial, elusive quest for above-averageness. Do you know the last time the Mariners made it to the World Series? Sorry. That was a trick question. The Mariners have never been to the World Series. But their drought can’t match the Chicago Cubs. The last time the Cubbies won a World Series, I’m pretty sure Millard Fillmore (right) was president.

So what do I love so much about baseball? Everything. Besides, it beats mowing the lawn, not to mention having sextuplets.

PS:  If you enjoyed this week’s post, please let me know by sharing it on Facebook, posting a comment or giving it a Like.  I am so excited about this year’s Seattle Mariners. Pundits speculate the team has improved so much this year that they may remain in contention for post-season play well into May.