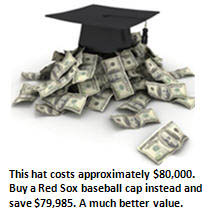 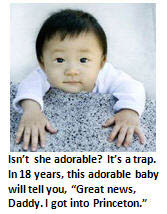 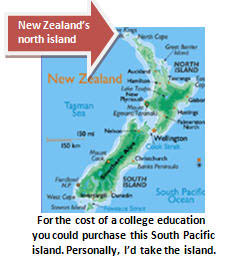 Back in the seventies, when I went to college, the cost of a year’s university tuition – even for an out-of-stater like me – was comparable to the cost of a nice drum set. Now, to send a child to an out-of-state university or a private college costs roughly the same as the GDP of say, New Zealand. [Author’s Correction: I apologize. The previous statement was a gross exaggeration. I meant to say the North Island of New Zealand.]

If you were smart enough not to make my disastrous financial mistake by choosing never to have kids in the first place, kudos to you. It must be nice to imagine retiring before age 75 with more than just your stamp collection for retirement savings. Feel no guilt whatsoever about the fact that this weekend you’re going to go out to buy a 28’ power boat – with cash – while I try to figure out whether our family can afford the extravagance of Pizza Hut this evening, given that we just went to the Olive Garden only two weeks ago.

But if you made that all-too-common costly mistake of deciding to raise a family, and you have kids nearing college age, many of the following questions may sound familiar:

Do these questions sound familiar? (By the way, it’s Charleston. I know that was bothering you, too.) To save you countless years of anxiety over how you will save up enough money to pay for your kids’ college educations, I wanted to share five time-tested strategies you won’t hear from that hack personal investment huckster Suze Orman: 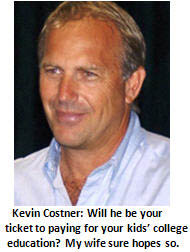 Strategy 1: Acquire one million dollars. Admittedly, this strategy may be more of a challenge for some of you than others. If you happen to have made a fortune by coming up with the idea for Skype or perhaps you know a millionaire you are comfortable blackmailing, this would be an ideal place to begin. This should be enough to cover at least the first two years of college, with enough left over for a few nice dinners out at Outback Steakhouse when you come to visit.

If you are a stay at-home parent, and your spouse’s income is not nearly enough to cover the cost of college – say your hubby writes a humor blog – consider divorcing your spouse for an older, wealthier mate. I might suggest an oil executive, just about any hedge fund manager from Goldman Sachs, or perhaps a graying, former Hollywood A-lister like say Kevin Costner. While at first this may hurt your spouse’s feelings, as soon as they realize they no longer have to cover the college bills, they’ll wonder why you waited so long to divorce them. Besides, Kevin Costner is actually quite a decent fellow, from what I’ve read in People Magazine.

Strategy 2: Cut back on non-essential spending. Look for areas of discretionary spending that you can put on hold. Does your spouse really need to have that heart bypass operation next week? Here are a few other tried ‘n true ideas: Skip dinners in months ending in the letter “r”.  Cut back on your water consumption by only showering in summer months. At Christmas, save money on expensive gifts by handcrafting personalized presents from common household items. (But be careful. I tried this last year – gave my girls friendship bracelets made of pipe cleaners and colored string. They would not speak to me for two weeks.)

Strategy 3: Don’t put off saving. The sooner you start building up your college fund, the easier it will be and the more you’ll have set aside when college arrives. My advice would be to start saving in 1983 – even earlier if you can. Don’t wait until say 2013, or you’re totally screwed, trust me. By then it’s way too late.

Strategy 4: Re-define “a quality education.” Convince your kids that all the elite colleges contain the word “Community” in their name. This simple technique could save you more than $50,000 in the long run.

Remind them repeatedly not to be duped by the insidious propaganda of marginal institutions like Yale, Princeton, Columbia, Brown, and Dartmouth. Those schools all suck. They just have slick marketing departments. The fact they all rejected me is beside the point. Trust me, they all totally suck. Suck, suck, suck. Look at their football programs if you don’t believe me. 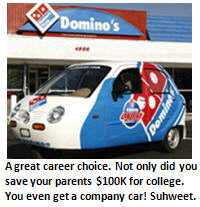 Strategy 5: Consider rewarding alternatives to a college education. Praise your kids as often as possible for their emerging non-academic talents. Comment casually how gifted a pizza delivery driver you think they could be someday if they played their cards right. Leave pamphlets describing pet-sitting as a career. Tell them how you can envision them becoming a superstar coffee drive-thru barista. Don’t forget to mention all the tip money they can earn.

The sky’s the limit (so long as the job doesn’t require a diploma). Remind them of how much more exciting it would be to become an assistant cashier at Build-A-Bear than having to sit through dull, boring college classes like accounting, mechanical engineering or Medieval French Gender Studies.

If you simply can’t amass the savings to afford paying for college, I might suggest getting your child to focus on stimulating activities other than their studies – perhaps mastering World of Warcraft XII or watching the complete season eight of Seinfeld instead of studying for finals. You may just discover that all your worries about paying for a college education have miraculously vanished into thin air.

PS:  If you enjoyed this week’s post, let me know by posting a comment, giving it a

or sharing this post on Facebook. And if you really, really liked it, please consider donating generously to the “Help Tim Pay for College Fund.” God bless you.