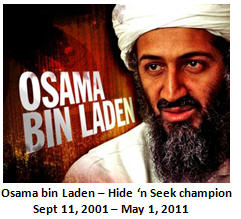 Thousands of Fox TV viewers are deeply disheartened over the news of Osama’s passing, in large part because it has spiked President Obama’s popularity ratings to his highest level in over 18 months. In a surprise counter-programming move, Fox News will be showing back-to-back episodes of Sarah Palin’s Alaska for the next three weeks while they determine what impact this news story has on the 2012 presidential election. 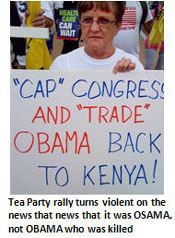 It is being reported that large numbers of Birthers from South Carolina to Mississippi are troubled and confused over news of the killing of Osama bin Laden. Having long argued that President Barack HUSSEIN Obama is a Kenyan-born Muslim and an Arab-appeasing terrorist sympathizer, they are struggling today to make sense of why our nation’s Muslim-in-Chief would order the execution of one of his own. Others simply expressed indifference about the killing, commenting “What difference does it make who died, Obama or Osama? They’re both Muslim terrorists.“

Republican presidential hopefuls, who have long argued that Obama is far too inexperienced and weak on defense and national security, were deeply upset by the shocking news about the President’s decisive action to take out Osama, as it now makes it extremely difficult for his critics to question his military leadership qualifications anymore. But Donald Trump expressed understandable skepticism over whether Osama had actually been caught and killed. He tweeted earlier today “bin Laden’s dead? Really? Show me the certified long form death certificate. Till then, I won’t believe any of this bulls**t.”

Sarah Palin was appalled at Obama’s “cut and run” decision to stop the killing at just Osama, commenting at a press briefing yesterday, “What about all the other Al Qaeda members still on the loose? We must not stop until we have killed every last Al Qaeda terrorist. We should start by nuking all of Pakistan, Afghanistan and Iran. And while we’re at it, we might as well wipe Yemen off the face of the map. I hear there are Muslims there too.  Better safe than sorry.” 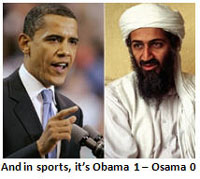 Political pundits speculate that the news of Osama’s death and the sudden spike in President Obama’s popularity may have prompted some Republican candidates to pull out of the presidential race entirely, despite their denials to the contrary. Former Arkansas Governor Mike Huckabee today announced he will not run for president in 2012, citing scheduling conflicts with his rock band Capitol Offense’s concert tour, saying, “We’re booked for a two-week gig at the Roanoke DoubleTree Inn in October, 2012. I just can’t fit it all in.” Meanwhile, presidential hopeful Newt Gingrich said yesterday he would really like to run for president in 2012, but he has some major home improvements to take care of in the fall of 2012, quipping, “Clogged gutters don’t just clean themselves, you know.”

Senator John McCain (R-Arizona) issued a somewhat mystifying statement in which he said that if had he been elected president in 2008, “Obama would have been caught and killed by my fifth day on the job.” When informed that Obama was actually his presidential opponent, McCain later clarified his statement to mean that he would simply have applied aggressive water boarding.

A Halliburton spokesman expressed grave sadness over the loss of bin Laden and the potential impact on military defense spending in the years to come. “To be honest, our P & L projections did not have bin Laden scheduled for termination until at least 2017. Needless to say, this surprise change of plans is not going to sit well with our shareholders, who were counting on major defense spending increases in the upcoming year.

Popular radio host Rush Limbaugh was irate over what he termed an outrageously reckless decision to take out bin Laden, pointing out that it will unleash a wave of terrorist retaliations from the remaining 17 Al Qaeda operatives still holed up in the caves of Afghanistan. “Clearly, President Obama hates America. His decision to take out Osama bin Laden will only fuel other America-haters the world over.” He then went on to suggest that for our national security, all Muslim Americans should be put on a terrorist watch list and subjected to TSA pat downs, and perhaps full body cavity searches, when entering public places such as Starbucks, Wal-Mart’s or their dentist office for their semi-annual cleaning.

A spokesman for the Neo-Nazi white supremacist group, Aryan Brotherhood, issued a brief statement of jubilation that Osama had finally been taken out – and then later issued a retraction, clarifying that they had misread the initial press reports and had thought Obama had been taken out. News of President Obama’s continued survival was greeted by anger and outright sobbing among the Aryan Brotherhood’s distraught members. 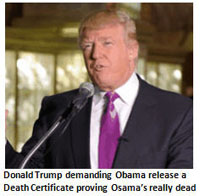 Despite all of the understandable sadness, anger and frustration over President Obama’s arguably reckless, ill-timed decision to take out the popular Al Qaeda leader, a small minority of Americans, estimated to number roughly 307 million, have found reason for optimism, jubilation and pride in their President, their soldiers and their country on the news that Osama bin Laden’s final hideout is estimated to be 20,000 leagues under the sea.

It now appears that the president’s catapulting approval ratings have caused Donald Trump to re-focus his energy on getting Celebrity Apprentice renewed for another season in lieu of pursuing a presidential bid. I for one am deeply saddened at this latest development. I was rather looking forward to Trump’s next press conference when it was anticipated he would announce to the world that he was the Navy Seal who killed Osama bin Laden – with his bare hands, as he yelled, “You’re Fired”.