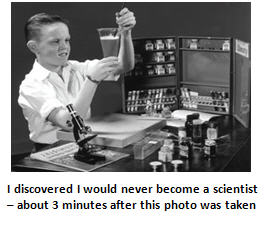 I followed the book’s instructions to a T: “Immerse the metal rods in boiled linseed oil….” Being genetically engineered from nine months prior to my birth to later become a male member of our species, I knew that reading the warning labels on a can of linseed oil was for sissies. Real men would no more read the warning label on a can of an element they had never heard of than ask for driving directions when they are hopelessly lost. Men just don’t do such things. My brilliant, highly intuitive adolescent mind quickly deduced that in order to make this experiment work, you need to “boil” the linseed oil, just as the book stated. How hard can that be? The book clearly said to immerse the metal rods in “boiled linseed oil.” Now here is a handy tip for future reference: Read the instructions on the can of linseed oil before you begin to boil it –whether you are a male or female. 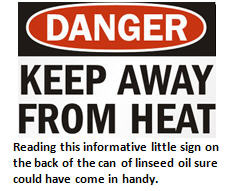 And here is the funny thing. I didn’t know it at the time, but linseed oil actually comes pre-boiled. Well, how about that! Imagine my surprise when after the flames erupted to a level of 8 feet I subsequently discovered that 1) not only did the can actually say that it contained “boiled linseed oil” right there on the can, but also 2) that in the instructions on the back side of the can, it clearly shouted in 14-point ALL CAPS: “WARNING: HIGHLY COMBUSTIBLE IF EXPOSED TO INTENSE HEAT. Keep away from all heating appliances, including stoves, ovens,…. blah blah blah,” who reads this crap, anyway? Certainly not this young, mad scientist. 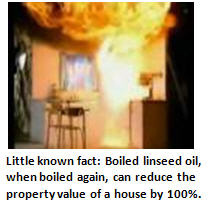 Apparently – and this is the part I did not appreciate at this particular stage in my educational development – different types of flames require different types of extinguishment. Did you know that not all flames take kindly to having water doused on them?  Well, neither did I.  I am happy to report that the flames all went out in an instant. For full disclosure, however, I must also report that in that same instant, the entire kitchen turned into a black sea of smoke and soot. I could not see two feet in front of me. Yes, in a flash – roughly coincident in time with the contact of water on the boiling boiled linseed oil – the entire room, floor to ceiling, was consumed by an instant cloud of thick black smoke. It was not until hours later that I was able to actually read the rest of the warning label about “in the event of fire, do not apply water…. blah blah blah….” 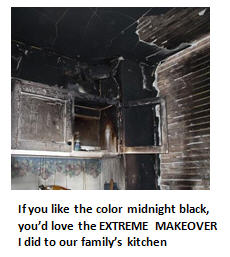 I opened up all the windows (after having to grope just to know which direction the windows were from my position in the room.) After about 25 minutes most of the smoke had dispersed, providing me a very clear view of the state of affairs of the kitchen. And the state of affairs was bad. Very bad. Every square inch of the room was completely covered in black soot – the walls, the floor, and best of all, the ten foot ceiling. It looked as if a wizard had instantaneously painted the room midnight black with one miraculous wave of their magic wand. Now please refer back to the part about my father’s unusually early surprise return home that day. That happened right about ….. NOW. 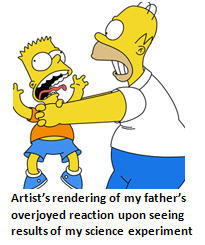 I would prefer not to dive deeply at this point into the nature of my father’s rather pronounced and singularly unsubtle response. Suffice to say that he was prone to over-reaction in the best of situations. And this was nowhere near falling into the classification of one of those “best situations.” To describe my father’s hair-trigger temper, I should mention that he had a complete meltdown on a prior occasion when I had displayed the reckless temerity to return a tape dispenser to the wrong drawer (true!) in his desk.

So perhaps you can use that previous reaction as an approximate benchmark to project the level of his response in this admittedly significantly more catastrophic situation that was upon us in the kitchen. Picture the level of rage that you came up with in your mind. Now multiply it by 342. You would now be in the general vicinity of envisioning how pleased and  impressed my father was by my scientific discoveries at the expense of his kitchen walls, floor and ceiling.

I vaguely recall something about being told that I would be “cleaning up every square inch of this room with a toothbrush” and being grounded until the next visit of Halley’s Comet.  The rest of his one-hour diatribe about my utter lack of judgment, intelligence, and ability to read directions, to be honest, was a bit of a blur to me – sort of like listening to Charlie Brown’s teacher. Wah Wah Wah….

So there are several important lessons I was able to take away from this traumatic experience in my formative youth:

Lesson #2: When you choose to ignore lesson #1 and boil the boiled linseed oil anyway, never use water to put out the flames. 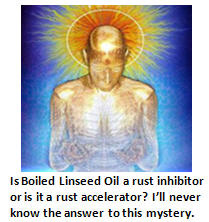 And Lesson #3: If you choose to ignore lessons 1 and 2 above, at least be sure you have a father who really has a strong appreciation for black as an interior decorating color for walls, floors and ceilings.

But there is one lesson that to this day I never was able to find out. And that’s whether boiled linseed oil was in fact a rust inhibiter or a rust accelerator. I guess there are some mysteries in life that we will simply have to accept we will never know the answers to. For me, this is one of those great mysteries.

(Footnote: Kitchen photos are not actual images of our kitchen. Actual results were much worse.)