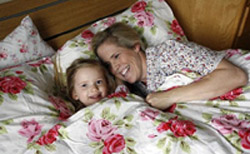 If you answered YES to all of the above, the odds are you are my wife. (Note to self: Be sure to delete that previous sentence before publishing this article.) If you answered NO to all of the above, this is a strong indicator that you’re a pathological liar. Either that or you truly are the World’s Strongest Parent, in which case, I’m not sure I care to be your friend anymore. 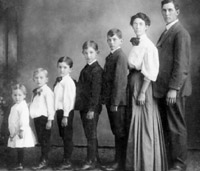 Who is giving the orders around your house these days? When I was growing up (that’s me third from the left), I did my chores without complaining and made my bed without being reminded 3 times. I knew that at any moment, one small behavioral misstep meant a 40% chance my father would attempt to kill me with the belt in order to teach me a valuable life lesson about say, the proper placement of silverware at the dinner table.

But that was a long time ago, in a galaxy far, far away. The truth is nowadays, most parents let their kids get away with stuff that would have had most of us packed off to a reform school in years gone by. At some point, most of us too often cave, finding it easier to pick up the dirty socks than to nag our kids for the 59th time to do it themselves. Over time, many parents slowly lose the battle for household supremacy. Before we know it, our kids are calling the shots. If this sounds familiar, I’m here to tell you there’s hope – not much hope, I’ll grant you, but a glimmer. A tiny, faint, infinitesimal glimmer. Sort of like how Venus looks at night to the naked eye.

Here are just a few of the common mistakes many parents make and what you can do to wrestle back control of your castle from the marauding serfs:

Mistake #2: Picking up after your teenager when they leave their stuff all around the house 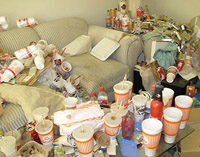 We have all done this one. Your son Jason has taken over the family room with his wrestling team buddies. They scarf down the three major food groups: pepperoni pizza, Mountain Dew and a couple of cartons of mint chocolate chip ice cream. Movie’s over. Friends bolt. Jason heads upstairs to bed, completely oblivious to the fact he left his smelly socks, sneakers, winter coat, and back pack on the floor – not to mention the five slices of pizza, eleven empty cans of Mountain Dew and a half-eaten carton of melting, leaking ice cream.

You probably scowl. Perhaps you even tell him to come down here this instant and clean up his mess. If you’re lucky, you may receive some sort of unintelligible Neanderthalean grunt. Either that or the official two-word response of the modern teenager: “I know!!!” But an hour later, “I know!!” fades into “I’ll do it tomorrow” which eventually morphs into “I forgot.” Next thing you know, you end up cleaning up the mess – because after all, if you don’t do it, who will?

Solution: Just pick up anything and everything Jason leaves around the house and deposit it in the giant dumpster known as his bedroom. Within days, the accumulation of dirty socks, stale pizza, flat soda, and food-encrusted dishes will get the message through loud and clear. And you will watch in amazement as Jason actually starts to clean up his room and put things in the trash. (Note of caution: In rare instances, this technique may result in permanent bedroom carpet stains, lost silverware, a three-inch layer of dirty clothes on the floor, and a persistent ant infestation. This technique should not be tried if the offender happens to be this author’s younger daughter.)

Mistake #7: Letting your teenagers leave the dinner table as soon as they have scarfed down their meal in 3 minutes and 42 seconds, while you’re still working on your salad 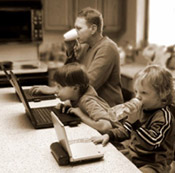 When you were young, you ate what your parents served you for dinner. And you waited for everyone to finish their meal before leaving the table. When did that tradition fall by the wayside? [Trivia: The correct answer is May 11, 2003 – although scientist can’t quite figure out why.]

Does the following dinner table scene sound familiar? Your 12th grader Tony is checking his phone for a text message about tonight’s basketball game, while your 9th grader Laura is texting her BFF about tonight’s sleep-over at Annika’s house. Before you’ve finished three bites of chicken, they vanish in a whirlwind – something about “gotta go or I’ll be late….” – leaving their half-eaten plates on the table for you to rinse and put in the dishwasher.

Before you know it, your kids have scattered like cockroaches when you turn on the kitchen ceiling light in the middle of the night. Whatever happened to family time at the dinner table where everyone asked “so how was your day?” (Deduct 10 points from your score if the last time your family actually had dinner together was May 11, 2003.)

Solution: Time for some tough love.  Implement a new rule: No one leaves the dinner table until mom and dad have both finished. Consider ankle bracelets that attach to the legs of the kitchen table. Set an example by nicely asking your spouse what happened today.  Don’t allow any cell phones at the dinner table – unless of course dad needs to check out the score of the Knicks game. Sure it may be a bit awkward at first, but eventually you will learn fascinating details about their lives at school, including “today was totally boring” or “I didn’t learn a thing” or “I’m pretty sure my Spanish teacher hates me”. Your kids’ inquisitive minds will be filled with thought-provoking questions like “Can I go now?” and “How about now?” and “How much longer before I can go?” and “Do you want me to miss the game?” Yes indeed, – quality time around the dinner table. They may grow up resenting you, but at least they’ll eat their peas.

Mistake #19: Helping them with their school project on the planets of the solar system 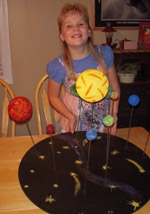 Who amongst us does not want to help out our child with their important middle school project? And don’t tell me that little Tammy Ferguson built her incredible 8th grade weather station science project without any help from Mr. and Mrs. Ferguson. Yeah, right! So there you are, helping your daughter Molly figure out how to paint Saturn. The next thing you know, you’re putting the finishing touches on the Asteroid Belt. Where was Molly all this time? Bragging to Justine on Facebook about how awesome her solar system project is going to be, now that Dad did the whole thing for her. Smooth work, Molly.

Solution: Don’t help. Offer your Molly lots of encouragement and support. Maybe you can help with the Elmer’s Glue. But otherwise, make sure she does the work herself. Okay, the end result may not be quite as polished. And sure, her solar system has only 7 planets (she accidentally left out Earth, not realizing Earth was a planet). And so what if all the planets as well as the sun orbit around Jupiter? And okay so in Molly’s universe, Mercury has wings and the Asteroid Belt is, well, an actual belt.

So what if Molly fails her science project, and as a result fails 8th grade, loses all her self-confidence, bombs her SATs, and can’t get into a good college. And so what if she ends up living in a homeless shelter, addicted to pain killers. At least Molly didn’t cheat on her science project like that Tammy Ferguson girl did. And that’s worth much more than the A+ that Tammy Ferguson got. (I can’t believe that kid eventually got into Harvard Medical School. Must be a legacy.) 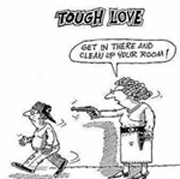 The times surely have changed since our childhood days. It seems more and more that the prisoners are running the jail. But there is hope. We parents need to stand up and remind our teenagers who is paying for the house they live in, the food they eat, the clothes they are wearing, and in some cases, the college they will soon be entering. In other words, we need to do a better job of making our kids feel guilty for everything they have. Show them PowerPoint slide presentations of starving kids in Africa. Periodically provide subtle hints around the house that life could be worse for them, by leaving brochures for reform schools for challenging teens – taped to their bathroom mirror.

We parents need to stop rescuing our kids every time they screw up. Let them figure it out on their own now and then, and stop cleaning up after all their messes. Otherwise, how will they ever learn how to take care of themselves and push their own kids away from them when they become parents?

So what’s Mistake #1, you ask? Not telling your kids every single day how much you love them – no matter how much damage they may have just done to your laptop, your car, or your credit rating. You can never tell them “I love you” enough. (But don’t forget about those brochures about reform schools. It’s sort of a carrot and stick approach.) But most of all, let them know you love them to the ends of the earth, forever and ever – albeit conditionally, depending on whether they made their bed.

It’s really that simple.  In the end, it’s about lov– wait a minute. Hold that thought…. Hey, who left the carton of melting mint chocolate chip ice cream on the suede couch in the family room? It’s making a holy mess on the new white carpeting. Rachel!!??? Did you do this!!?? Raaaaachelllll? Where the heck is that kid?  This always happens. What a God-awful mess. I tell you, this is the very LAST time I’m going to clean up after her, I swear. THE LAST TIME!!!