August: As the mid-term elections get closer, the Tea Party phenomenon takes center stage. Momma Grizzly Sarah Palin throws her support to more than 80 different Tea Party candidates. Tea Party members bond over common values: a belief in small government, reducing spending, cutting taxes, the sanctity of marriage between a man and a woman, and a deep-seeded belief in the freedom to spell words on protest signs any way you like (see photo above). Examples include “Obama is a Haf-Breed Muslin” and “Dump the Polititions” and my own personal favorite Tea Party protest sign, “Youth in Asia will kill your Grandma” (all actual signs from Tea Party rallies.)

Also in August, God-fearing, patriotic Americans rally in support of patriotism, America and a chronic fear of God, as they protest Obama’s plans to build a terrorist, radical Al Qaeda Muslim (or Muslin, for that matter) Mosque at Ground Zero on top of the graves of 9/11 victims. Oh sure, so it’s not technically a mosque – it’s actually a community center (with a basketball court). And okay, so it’s not actually in any way supportive of or connected to radical Muslims. Oh, and okay, so it’s more like five blocks from Ground Zero with no view of the area. And okay, so it will allow people of all other religions to use the facilities as well. But if you ask me, they’re up to no good. They probably want to force our women to wear burkas, join the Taliban and swear our allegiance to Kenya (which I think is next to Haiti). This evil project must be stopped. 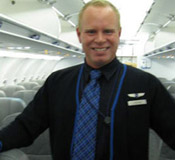 Our “Fifteen Minutes of Fame” Award for 2010 goes to 16-year veteran flight attendant Steven Slater (right). Slater has a major meltdown as the Jet Blue plane he is working on taxis to the gate, after an obnoxious passenger gets abusive. In a moment of clear-minded thinking, Slater gets on the loud speaker, tells the entire cabin of passengers to “go f**k yourselves”, grabs a beer and deploys the emergency chute to make his grand exit from the plane. He is arrested shortly thereafter for reckless endangerment.

Jet Blue demonstrates class by apologizing to all the passengers with an extra 0.05 oz. bag of peanuts – and a five dollar Sky Mall gift coupon to its first class passengers – as they exit the plane. Slater later apologizes for his actions, then signs a $10 million advance to write a tell-all book about the stressful, nerve-wracking world of today’s flight attendants.

Slater’s antics inspire thousands of stressed-out workers all over America to follow his lead and stand up to abusive customers. Among his legion of admirers is a 57-year old midnight-shift 7-Eleven cashier in Toledo, Ohio, who snaps when a customer downs their Cherry Slurpee too quickly and berates the clerk for not warning him about brain freezes. This sets the clerk on a chaotic rampage in which he is caught on camera assaulting the customer with sticks of beef jerky, before storming out of the store with a cache of Big Gulps, Doritos, and a box of Twinkies.

And an update from BP, and it’s more good news: BP is pleased to report it is modestly optimistic it will only have to deploy two more bone-headed, destined-to-fail solutions before it hopes to have a more thought-out plan to stop the oil leak. But a spokesman for BP suggests not betting your life savings on it just yet. 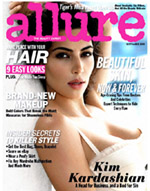 September: Notoriously publicity-shy Kim Kardashian, star of the longtime reality TV hit show Keeping up with the Kardashians, appears on the cover of fashion magazine, Allure. In an inspiring cover story entitled “A Head for Business and a Bod for Sin”, Ms. Kardashian reveals that it’s life’s simple pleasures that mean the most to her – like a walk on the beach (of her own private island in the Maldives) and a cup of hot cocoa (on board her yacht anchored in Cannes, France, with her lover, Antonio Banderas). See, she’s not really so different from the rest of us after all.

Tea Party candidate for the U.S. Senate from Delaware, Christine O’Donnell, admits to having dabbled in witchcraft in high school. The confession hurts her polling numbers among every segment (other than the witches and warlocks demographic, where she catapults 15 points in the ratings). In a controversial TV spot she goes on to say she is no longer a witch, but when asked later in an interview what’s her favorite soup, she veers off script and lets it slip that it’s Eye of Newt.  She later retracts her answer, saying she meant to say cream of asparagus, but the damage has already been done.

October: In the feel good story of the year, the world rejoices over the dramatic rescue of 33 Chilean miners who had been trapped 2,300 feet underground for 70 days. Subsequently, former President George Bush raises questions about the wisdom of letting minors play around unsupervised in underground caves. The world rejoices as miners come up one by one, greeted by the Chilean President. Then the world watches in shock and sadness as miner #27 reveals he is going to leave his wife of 17 years for miner #19. They never should have allowed them to spoon while they were down there, if you ask me. It’s just wrong.

In other news, President Obama (seen in a Fox News photo) in a bipartisan attempt to extend an olive branch to Congressional Republicans, offers to admit to being a Muslim and to having been born in Kenya if Republicans will agree to support the repeal of Don’t Ask Don’t Tell. After first rejecting a deal outright, Republicans indicate they may be willing to soften their opposition if Obama will admit that he is a Harvard-educated, Ivory Tower elitist, a horrible bowler and that he once dated a white woman. Obama caves to get the deal. The stock market rallies on the news.

In other news, in a surprise move very few Hollywood insiders saw coming, Kanye West is spotted in public actually saying something nice about somebody else.

November: Riding a tidal wave of voter discontent, Republicans regain control of the House and almost take back the Senate, reflecting the widespread frustration of many Americans over the sluggish economy and growing anger of millions of Fox News viewers over Obama’s close ties to Taliban warlords. Several Tea Party candidates sweep into office on a promise of making long-overdue, deep spending cuts – except in defense spending, of course, oh and in Social Security, and Medicare, and Medicaid, oh and of course unemployment benefits.  But otherwise, deep, deep cuts for sure. No exceptions, period – except for tax breaks for small business, of course, oh, and for Goldman Sachs.

More importantly, Bristol Palin (right) makes it all the way to the finals of Dancing with the Stars. Her controversial run lasts almost as long as her mother’s reign as Governor of Alaska, causing one disgruntled TV viewer to take out his frustration by actually blasting his own TV set with his shotgun, proving once and for all that guns don’t destroy TV sets, Palins do.

December: WikiLeaks does it again, sparking yet another worldwide diplomatic crisis when it releases more than 250,000 classified diplomatic cables, to the embarrassment of governments everywhere. As first reported by VFTB, this scandal has government leaders worrying about possible diplomatic fallout from snide comments made about world leaders and more than a little bit curious about what Libyan leader Muammar Kaddafi’s “voluptuous Ukrainian nurse” looks like in a black teddy. Grrrrrowwwwwllll.

In other news, in the waning hours of 2010, President Obama is able to check one of his campaign promises off his to-do list by signing the repeal of Don’t Ask – Don’t Tell – the longtime controversial policy for handling the sensitive issue of gays in the military. Senator John McCain immediately protests, demanding further investigations into how this may impact military readiness and orders a panel to survey sailors about whether they feel the Village People’s song In the Navy makes them uncomfortable. Fellow DADT supporter and closet gay, Senator Lindsay Graham, argues that repealing DADT will lead to dangerous, wide-sweeping, unforeseen consequences, like allowing gays to vote or use the same restrooms as heterosexuals. Is the nation ready for this? Only time will tell.

In a related story, Lady Gaga is awarded MTV News’ prestigious and previously unheard of “Woman of the Year” Award for her activism in support of gay rights. One of the judges, asking not to be quoted on the record, reveals that the real reason they gave her the award was because, quote: “Who else could pull off strutting out on stage in a dress made of meat or wearing a hairdo that looks like a telephone? Seriously, who else?” Phone hairdos instantly become the IN Look for fashion-conscious teenage sluts everywhere, overtaking the popular Justin Bieber nail polish fad.

Well, that’s it. You are now caught up on everything you needed to know about the past year. Yes, 2010 was a year of extreme highs and extreme lows but somehow, we all made it through it – all of us, that is, except for Segway president, Jimi Heselden, who, alas, won’t be joining us for the ride in 2011. You see, Jimi’s journey was cut short this past fall, when he died while steering his own Segway – off a 30-foot cliff into a river.

That’s the Year in Review for 2010, as seen from the Bleachers. Perhaps I’m off base.