And the Employee of the Month Award goes to? 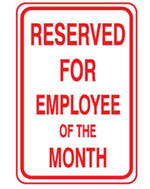 As most of you know, over the past 25 years, I have been a highly sought-after lecturer / motivational speaker on business success strategies (gleaned largely from lessons I learned by making boneheaded business mistakes over the past 25 years). Every organization’s success is built on (brutally beating down) the backs of its frontline employees.

Business experts like myself – and even experts not like myself – have long known that employee recognition programs are a powerful way to reward your employees for their efforts. These programs build loyalty and reduce turnover, while at the same time improving systems, reducing waste, increasing customer satisfaction levels and keeping trophy companies in business.

Thanks to innovative employee recognition programs, every year motivated employees find creative ways to eliminate redundancies, cut costs, improve efficiencies, and leapfrog over obnoxious rival suck-ups competing with you for that next promotion.

There are a variety of highly effective employee recognition incentives, from nifty restaurant gift certificates to prime location parking spaces to those popular Employee of the Month plaques in the lobby that list the name of the same employee, Lin Chong (left), every month from January 2003 through October 2010 except for two months in 2008 when she was briefly out for chemotherapy for a life-threatening illness. In each case, these highly motivating incentives cost their employer roughly the cost of one cartridge of black inkjet printer toner. 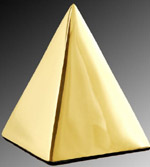 It’s amazing what you can get your employees to do to earn a $20 lunch with the CEO or win the prestigious honor of proudly displaying the Golden Pyramid trophy at their desk for a month for having found an ingenious way to recoup $50,000 in efficiency savings for their employer. The winning employee doesn’t need to know that the prized Golden Pyramid trophy was originally created as a middle school project that the VP of Marketing’s son Bradley turned in for his seventh grade report on The History of Egypt (for which he got a C+).

Every month, thousands of dedicated workers from Boston to Bakersfield go above and beyond the call of duty for their employers. Thankfully, most of them have not caught on yet that they really could have coasted 98% of the time and nobody would have noticed.

If I may brag a bit, I myself was once voted Employee of the Month. It was for the great sales results that took place one month when I was away on vacation. My sales team pointed out to senior management that the thought of me being out of the office and out of ear shot for the month instilled in them a level of motivation and positive morale they had never experienced before. Sadly, my team’s outstanding performance was short-lived, as output fell off dramatically shortly after I returned from vacation. I can’t put my finger on the reasons behind the sudden productivity decline.

This month’s Employee of the Month nominees include some impressive finalists:

Herbert Furnmueller, of Trousdale, Tennessee, who saved his employer more than $175,000 a year by secretly videotaping the five guys in the warehouse responsible for loading the delivery trucks and proving that these guys actually sat around playing Texas Hold ‘em for 8 hours a day while paying two high school kids with a case of Budweiser each day to do all the work for them. As a result of Herbert’s courageous whistle blowing, the company fired all five warehouse malingerers – and hired the two high school kids and doubled their pay to two cases of Bud per day. 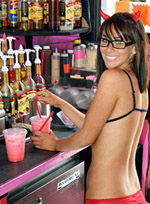 Tiffany Carlyle (left), a 23-year-old graduate student who works part-time as a barista at the Java Junction in Hillsboro, South Dakota. Tiffany singlehandedly increased customer traffic and latte sales by more than 600% in just one month, simply by eliminating layers of bureaucratic inefficiency in her job (which layers of bureaucratic inefficiency took the form of layers of clothing).

The store’s owners, who live 750 miles away in Indiana, are not exactly certain as to what Tiffany’s efficiency improvements were, but they are thrilled about their increased profits. They have heard reports of customers coming back three and four times in the same morning for refills – something that never happened when the previous barista, 68-year-old retiree Bert Terwilliger, worked the very same location.

As impressive as the above achievements were, they were not quite enough to eclipse this month’s winner. Drum roll, please. This month’s Employee of the Month is…… Peter Crocky, a waiter at a Buffalo Wild Wings restaurant in Skokie, Illinois. Peter was just doing his job, serving a Mushroom Explosion Burger to Mrs. Dolores Johnson at table #37 when three teenagers at one of his other tables attempted a “dine and dash” – bolting the restaurant without paying.

The three teens climbed into their SUV. As they drove off, they suddenly realized they had an extra passenger – Peter Crocky, who had chased them out of the restaurant and had leaped onto the roof rack of their vehicle. (I swear I’m not making this up.) According to police, the teens drove eight blocks, attempting to pry Crocky from the roof rack as he clung precariously. The teens were later arrested and face theft and battery charges. Afterward, Peter Crocky hurried back to his restaurant to finish out his shift because, as he said, “I still had tables.”

Now, that is dedication to one’s job. Well done. So, Peter Crocky, you are this month’s proud winner of the EMPLOYEE OF THE MO- what? … er, um… Time out. Apparently, I spoke a bit too soon. Turns out that the judges made a mistake. Peter did a really great job but the judges have just informed me that as daring and noble as his effort was, someone else was even more daring than Peter.

Ladies and gentlemen, this month’s OFFICIAL Employee of the Month Winner is… Andrew McKnight, a waiter at a Waffle House in Murfreesboro, Tennessee. Turns out that McKnight was also confronted by a dine-n-dash in progress at his restaurant. He too leaped onto the top of a speeding getaway car containing three teens who had tried to sneak out without paying. (Not making this story up either, I swear.)

Mr. McKnight gets the slight nod over Mr. Crocky for three reasons: First, the car he was clinging to reached speeds of 60 miles an hour; second, he was clinging to the car’s hood and lacked Mr. Crocky’s luxury of a roof rack to grab onto; and third, he has to endure the embarrassment of telling people he works at a Waffle House. He also somehow managed to call 911 from his cell phone while bouncing around on the hood of the car. 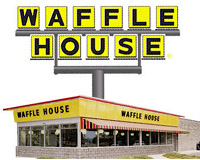 McKnight truly deserves this award. By all accounts, he is a humble young man who never draws attention to himself, always holds the door for seniors and actually declares more than 10% of his tips on his tax return. In four months, as soon as he is out of the hospital intensive care unit from the head injuries sustained when he was thrown from the hood of a Cadillac Escalade into a garbage dumpster, he looks forward to returning to work at the Waffle House. He loves waffles. (Who doesn’t, if you ask me!)

His employer plans to make a big display of appreciation for McKnight upon his return to work. I’ve learned that plans are underway for him to receive his own Employee of the Month parking space – right next to the meat deliveries entrance in back, as well as presenting him with a framed photo of McKnight shaking hands with “Wally Waffle” (the chain’s waffle-shaped mascot) and a plaque with McKnight’s name and the caption “Employee of the Month – November” in the front lobby, right next to the gum ball dispenser.

But the company really went overboard, if you ask me, with a $250 gift certificate for McKnight – good at any of the more than 1600 Waffle Houses nationwide (not valid on weekends or holidays – must purchase another entrée of equal or greater value). Talk about going the extra mile. Way to go, Waffle House. You’re my Employer of the Month!