Torn about who to vote for this year 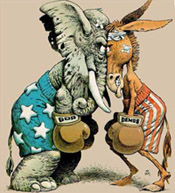 I try to be an informed voter. So this year, I researched the candidates running for political office in my region, listened to the debates, read their policy platform statements, watched their TV ads and scoured through their direct mail literature to get a clear picture of where they stand and how they differ from their opponent on the important issues facing us.

After all my research, I am still a bit uncertain as to whom to give my vote. Perhaps you can help me decide. Take the race for U.S. Senate for my state. It’s between three-term Democratic incumbent, Patty Murray, and Republican challenger / pro-business advocate, Dino Rossi.

Let’s take a look at how they stand on some of the major issues of the campaign, in their own words:

On Jobs and the Economy

Democratic position: The most important issue in front of us this election year, without question, is jobs. Our unemployment rate is almost 10%. While Wall Street fat cats are raking in record profits again, none of this has trickled down to the millions of unemployed workers on Main Street. My honorable opponent has no idea what it’s like to be unemployed. He has the luxury of sitting in his corporation’s penthouse office suite – a captain of industry, sipping dry martinis with his Wall Street bailout buddies. He has no idea what it’s like to be a laid-off fork lift operator or an unemployed single working mother of three. You know he didn’t buy those cuff links at Sears. Probably drives a Bentley, if you ask me.

Republican position: My reputable opponent and I agree on one thing – and that’s that she wants to turn this great country I love into a bloated big government, socialist bureaucracy intent on taking over every major industry and depriving your freedom to pursue the American dream. As a three-term, inside-the-Beltway bureaucrat, my opponent is completely out of touch with America’s small business people. She wants to do an extreme makeover on the USA and convert it into another Belgium. But this is America, the greatest nation on earth. I won’t let us become another Belgium, no matter how hard my distinguished opponent schemes for this to happen.

Democratic position: Belgium, eh? Look who’s talking. If anybody in this race is like Belgium it’s my esteemed opponent, who changes his mind on issues so often we might as well call him a Belgian Waffle. First he is for tax reform; then he’s against it. Make up your mind. Would you like maple syrup with your waffle? Be careful. This syrup is from Canada. Perhaps you might not want to be seen with syrup imported from a nation with socialized medicine, eh?

Republican position: What my respected adversary fails to mention is that she is one-eighth French. Can we really trust a French legislator in America’s halls of power? Someone who will stop at nothing to surrender our rights and freedoms to the onslaught of Government intrusion and oppression? I think not. As for immigration reform, I am completely for it, starting with the construction of a 20-foot tall, 10,000 volt electric fence – around my distinguished opponent.

Democratic position: I believe we critically need tax reform. How is it that someone making $5 million a year can end up paying a smaller percentage of taxes than a fire fighter making $35,000? If you ask me, that’s plain wrong. My celebrated opponent wants to lower the taxes on the top 5% and give every Wall Street executive a $5 million private jet. Did you know that he wants to terminate your unemployment benefits and outsource your job to orphaned children working in Filipino sweatshops?  He wants to eliminate your social security nest egg so he can further de-regulate the banking industry and ruin the credit rating of every middle income American like you. Help me stop him from committing financial genocide on America.

Republican position: With all due respect to my venerable, misinformed adversary, what the f*ck are you talking about? I just want a level playing field for small businesses. My opponent will increase taxes on every American small business by Fifty Thousand Percent and use those tax revenues to turn our state into a giant hippie commune where millions of deadbeat welfare fraud criminals will use our hard-earned taxpayer money to get high on Marijuana, which would be legalized for young children and dispensed at our elementary schools like candy if my esteemed opponent is re-elected.

Democratic position: Hey, esteemed Crack Head! Which of your neo-Nazi fact-checkers came up with the notion I’m in favor of legalizing Marijuana for kids? If you want to talk about intoxicating our minors, I’ll admit that you are more qualified to discuss the issue than I am, given your two convictions for driving under the influence in your twenties. How was your rehab experience anyway?

Republican position: Hey, that happened over 30 years ago, my distinguished bitch. And since we’re on the issue of the deficit, what exactly is your plan to get our nation out of the financial hole we’re in right now, thanks to the Stimulus plan? Oh, that’s right – you don’t have a plan! Thanks to you and your President, we now have a $17 Gazillion deficit and a $30 Bazillion debt which our grandchildren’s grandchildren will still be paying for long after we’ve become a wholly-owned subsidiary of China. My opponent is single-handedly responsible for the fact that our nation’s debt now equals the GNP of China, Russia and Europe combined. Have you no shame?

On Regulation of Business

Democratic position: $17 Gazillion and $30 Bazillion? These aren’t even real numbers, you moron.  Did they not teach math at your high school?  The reason we have such a deficit is because of the mess your president and his Wall Street banker buddies got us into with their sub-prime lending practices and a complete lack of oversight of the banking industry. And you want more de-regulation? If my opponent has his way, he will reverse all consumer protection laws from the past 50 years. Every new car sold will come with a big yellow sticker that reads “Product not backed by any warranty whatsoever. Drive at your own risk. If product fails to perform as intended, you’re screwed. Stop whining. Move to France and form another union.”

Republican position: What all of you communist brie-eaters want to do is implement a complete government take-over of business like you just did with the auto industry and healthcare. You want to regulate small businesses out of existence so that the only company left standing is Uncle Sam Inc. Pretty soon you’re going to want to control the delivery of the mail. That’s not what our founding fathers wanted, with all due respect to my venerable opponent from Mars.

Democratic position: First of all, the government already controls the delivery of the mail. It’s called the U.S. Post Office, you turkey. As for what our founding fathers wanted, give me a break. They made no mention of abolishing slavery or letting women vote either. Should we overturn those amendments, while we’re at it? For that matter, they made no mention of healthcare reform either but yeah, I voted for it. It’s time we stop letting private insurers make obscene profits by refusing health care coverage to those in need. 40 million people are without coverage. It’s time someone regulated this totally out-of-control industry, you male chauvinist pig.

Republican position: Good idea, you whore. And while we’re at it, why not regulate the thermostat temperature in our homes, what books we read to our children at bedtime, and which sports we watch on TV. You may believe that our free market principles are an irrelevant relic of a bygone era, but I for one still believe in the American dream for all Americans, with the limited exception of Muslims, gays in the military, and of course, communists like you.

The Direction our Country is heading

Democratic position: In conclusion, America is the greatest nation on Earth. Its best days are ahead of it – so long as we don’t turn the ship around and return to the mistakes of the past. My opponent wants to ensure that the rich Wall Street bankers get their million dollar bonuses but does not care about Joe Six Pack on Main Street. And I am pretty sure my opponent wears a toupee. Please vote for me on November 2nd. A vote for me is a vote for jobs, a stronger economy, and better America.

Republican position: I remember growing up as a poor youngster, working on my daddy’s wheat farm in a small town where people went to church on Sunday, believed in God, said a prayer before the family meal, respected their elders, did their chores, and were white. They didn’t expect the government to hand them anything. I want to return to that simpler time, when people knew each other by first name, marriage was between a man and a woman, and brie-eating, terrorist-hugging Communists were barred from the U.S. Senate chambers.

Let’s take our country back from the clutches of an over-reaching government. Vote for me on November 2nd and tell Congress that we’re not willing to become the Socialist States of America. Oh, and by the way, my opponent is a practicing Muslim, who wants to build a mosque in your neighborhood. She is also in favor of letting sex offenders serve out their sentences as teachers in our middle schools, so they can molest our innocent young children. God bless America.

Democratic position: What the hell are you talking about? Can I please have a chance to rebut that ridiculous accusation? That is completely and utterly false claim, and I need a chance to respond to- ….

Republican position: Did I mention that she is also a convicted heroin dealer who frequents sex clubs in DC with her lesbian senate page teenage lover and once pondered getting a sex change?

Democratic position: Convicted whah?? Hey, he’s not allowed to just make this crap up, is he? That’s totally unfair–

So as you can see, both candidates are highly appealing, with impressive credentials and clearly thought-out positions. It’s so hard to decide. In the end, I think I have to vote for the Democrat candidate. I just can’t see myself voting for someone who wears a toupee.