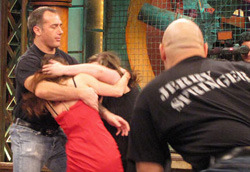 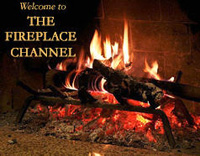 With 2,685 cable channels to choose from at last count, there’s a show for just about every taste. There are channels devoted to golf, to cooking, and I am sure if you look hard enough, probably a golf cooking show featuring dessert recipes of the LPGA tour. At Christmas time, there’s even a fireplace channel (true) – 24 hours of nothing but an actual fireplace burning, one log after another. Be sure to watch episode 16 where the log rolls off the grate and briefly singes the carpet. A scary moment. Not for the squeamish.

The fine creative geniuses at our nation’s television networks never stop coming up with illuminating ideas to quench our thirsty minds. With my VFTB journalist press credentials, I was able to get a sneak peak at some of the reality shows planned as mid-season replacements. The line-up is impressive:

In an attempt to get more parents to watch TV with their kids, PBS is launching a spin-off of its iconic show Sesame Street called Sesame Street – After Dark. Tagline: What happens on Sesame Street stays on Sesame Street. Using a documentary approach, the series profiles what happens on the set after the lights go dark. Let’s just say “Tickle Me, Elmo” takes on a whole new meaning. The show confronts speculation around Big Bird’s sexual orientation and explores why Oscar is always so Grouchy. Could it have something to do with a love triangle with Bert and Ernie? You’ll have to watch to find out.

The Food Network will attempt to capitalize on our national obsession with coffee in their new show The Star Buck(s) Stops Here. Contestants will race across the country, attempting to be the first to have a double tall skinny soy latte (no foam) from a Starbucks café in all 50 states. The winner will get a $1 million Starbucks gift card (good for 60 Double Tall lattes). But beware of the scantily clad female baristas who secretly plot to slow them down by asking if they would like a sprig of cinnamon or a scone to go along with their latte. Will their Starbucks gift card contain a secret short cut to bypass Arkansas or contain an immunity challenge? Stay tuned.

BRAVO TV’s megahit, America’s Next Top Model, a hit with teenage girls and superficial fashionistas everywhere, has inspired a spin-off: America’s Next Top Anorexia Rehab. Emphasizing the importance of an unattainable body image, cavernously sunken cheek bones, and a perpetual state of malnourishment, this new show will track the progress of past ANTM contestants as they attempt to keep down a glazed donut without vomiting. First one to attain a weight of more than 95 pounds wins the grand prize – $50,000 worth of original Versace gowns (size zero) plus liposuction surgery to eliminate all the ghastly weight they’d put on during the competition.

Going head to head against BRAVO is Entertainment Network’s new show. Playing off our fascination with fad diets and paper-thin movie stars, E! will jump into the Celebrity Survivor genre with its own new show: Starving with the Stars. 16 overweight C-list celebrities will compete to see who can starve themselves to death first and win the grand prize: their own primetime televised funeral and a cologne fragrance posthumously named after them. My money is on Lindsay Lohan.

In an effort to boost sagging ratings of two previous mega-hit shows, The Deadliest Catch and Ice Road Truckers, the History Channel will combine the two series into one, when they launch Ice Road Truckers’ Deadliest Catch – profiling rugged Arctic truckers as they retell their most harrowing ice fishing misadventures. The pilot episode features five truckers from Yellowknife and the women who vie for their men’s attention as the men must decide who they love more – their wives or Arctic Char.

The Poker Channel (formerly known as the Travel Channel), smartly concluding that 22 hours a day of poker programming is simply not enough, will launch yet another card game reality series: The Westminster Dog Poker Show. Spoiler Alert: St. Bernards are ruthless cheaters at Texas Hold ‘em. And daschunds can’t bluff worth a damn.

Not to be outdone by MTV’s smash hit reality show, Jersey Shore, The WB is touting a new series called Gulf Coast, featuring hotties like Crystal Beth, Hottie Mae and the curvaceous siren / minimum wage beautician Sandy Pelican, as the girls try to score with out-of-work gulf fishermen and tobacco-chewing oil rig pipe fitters. If you like your women as steamy, hot and sticky as a Gulf coast oil spill, you’ll love Gulf Coast.

C-Span, which has completely cornered the target market of beltway political wonks with sleep disorders, has a slate of exciting new shows sure to cure even the worst case of insomnia. Shows planned include: A weekly live reading of the meeting minutes from the Sioux Falls, SD city council on whether to eliminate free downtown parking on Sundays; a mini-series on the brave men behind the Taft-Hartley Act; and a ten-part series about the life and times of Millard Fillmore, perhaps our least charismatic president. Here is a fascinating clip from Episode 3:  In 1828, Millard Fillmore was elected to the New York State Assembly on the Anti-Masonic ticket, serving three one-year terms, from 1829 to 1831. In his final term he chaired a special legislative committee to enact a new bankruptcy law that eliminated debtors’ prison and in 1830 his nonpartisan – zzzzzzzzzzzzzz.

CNBC, NBC’s business and financial news network, has plans to launch its own game show. Since the economy cratered in 2008, millions of Americans have lost their life savings or are under water on their mortgage. That’s the zany backdrop for their new show, Who wants to Declare Bankruptcy? Each week eight lucky losers will vie for the opportunity to have all their financial obligations and their integrity wiped away as they compete to be declared the most bankrupt person of the year. Celebrity Bankruptcy Court judges will include past bankruptcy claimants, Donald Trump, Willie Nelson and George Foreman.

And in a surprise announcement, a new cable network will launch in January: The Twitter Channel, featuring a primetime lineup of more than 750 different shows daily – each one averaging approximately 11 seconds. Each show will be shown without commercial interruption – or verbs. Twitter Late Night will include  interviews of celebrity tweeters from Lady Gaga to Kanye West, which get cut off after 140 characters have been uttered. (Joe Biden will not be a guest, for obvious reasons.)

I can’t wait for these new mid-season reality shows to air. Until then, I’ll just settle into my La-Z-Boy recliner and watch the ten-hour Wife Swap marathon on Lifetime. Or maybe I should watch Humidity Week on the Weather Channel. Hmmm. Decisions, Decisions.