Life is pretty stressful at times. When I’m feeling a bit overwhelmed, I like to find a comfortable couch, close my eyes and listen to a relaxing sound. And no sounds are more soothing to me than the rhythmic sound of ocean waves crashing into the shore or the gentle gurgling of a babbling brook or the soothing hum of 35,000 rabid South African soccer fanatics at the FIFA World Cup, blowing their lungs out with their plastic 4 dollar and 95 cent vuvuzelas. If you still haven’t heard of a vuvuzela (pronounced “Voo-Voo-ZAY-Lah), it can mean only one thing: You’re an American.

Surely by now you must have seen and heard a vuvuzela. Click here to listen to its soothing sound. Now, wasn’t that relaxing? Now just imagine that soothing humming sound TIMES 35 THOUSAND …. for an hour and a half….. non-stop…. without commercial interruption. Originally used to summon distant African tribal villagers to attend community gatherings, the vuvuzela has become synonymous with the 2010 FIFA World Cup in South Africa, with its distinctive nonstop, deafening, monotone buzzing sound. The vuvuzela may come in 275 different colors, but they all come in just one note: B flat.

END_OF_DOCUMENT_TOKEN_TO_BE_REPLACED 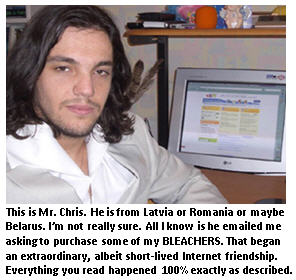 Welcome back to the thrilling conclusion of my true, unedited story about my fleeting friendship with an Internet Scammer named Mr. Chris. If you missed the last week’s Part I, you can get caught up here. If you were with us last week, you know that it all started when I received the following unusual email in my SPAM mail folder.

To: (this field was left blank)

Hello.  Am Mr. Kelvin Chris and will like to place an order regarding some bleachers from your company to Latvia. What is their price ranges, also your terms of payment as well. hope you answer to my request ASAP. Thank you very much and waiting for your prompt responds. God Bless You.

I would now like to let you in on a little secret – come in close…. closer… Psst: I don’t actually sell bleachers. It’s a humor blog. View from the Bleachers is a metaphor.

But Mr. Chris wanted to engage me in a bit of Internet commerce with terms most favorable to him. So I could not help but have a little fun by playing along. I never thought he would actually respond back to me after my ridiculously satirical reply. But he did. Oh yes.

END_OF_DOCUMENT_TOKEN_TO_BE_REPLACED

Recently, I made a new friend across Cyberspace: a very nice man named Mr. Chris. Well, at least I thought he was a friend. For a week, it looked like we were going to become best buddies. But sadly this story of fleeting friendship has a heart-breaking ending.

You see, Mr. Chris is a documented Internet Scammer – listed on web sites for trying to con people out of their money by offering to overpay with a bad check or stolen credit card, and asking the victim to send back a check in return for the overpayment. Your classic Internet scam.

What made me suspicious, you might ask? Well, I think it was his first email which I stumbled onto in my SPAM mail folder which lacked any name in the “to” field. His email asked about pricing for BLEACHERS.

END_OF_DOCUMENT_TOKEN_TO_BE_REPLACED 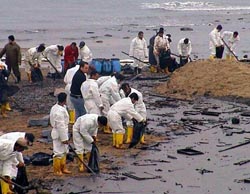