My advice to the graduating class of 2011: Don’t Tweet Your Junk. 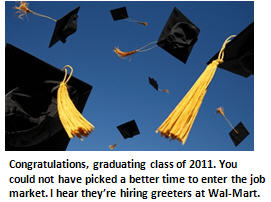 Greetings, Class of 2011. My, don’t you all look so grown up in your elegant caps and gowns and iPods blasting out Death Cab for Cutie at full volume. It seems only yesterday that you were stumbling around in Huggies and toddler booties and iPods blasting out Raffi at full volume. Graduation Day is upon us for millions of American college seniors like you. As has been my tradition for the past 17 years about this time, this week’s post is my annual Advice to you, the College Graduating Class of 2011.

My advice to you? Don’t pay attention to anyone who tries to give you advice…. except for the advice I am about to share, of course. It’s important that you make your own choices in life. So make good ones. In looking back on the choices I made in my youth, I realize I made some poor ones now and then. If I had it to do over again, I wished I hadn’t taken three years of Latin in high school. I’m not Catholic so becoming Pope is probably out of the question. So exactly when would I ever have used it? Never. 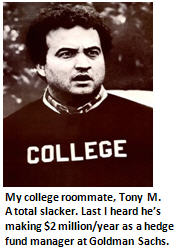 I also should never have taken Post-Modern Latvian Studies in college. That [#bleep#]-ing bastard Professor Yuri Švābe was a cruel old son of a bitch. I wish he would die a painful, wrenching death for totally messing up my GPA… I mean, er, um, I found him to be rather draconian in his grading methodology. Perhaps most of all, I deeply regret rooming with Tony Markowitz of Monmouth, New Jersey for two years in college. Not only was he a complete slob and never did the dishes, but he always smelled like bass and routinely ate my Lucky Charms cereal without asking. I urge you to learn from my youthful mistakes.

For many people, a college education is an important prerequisite to a financially rewarding and meaningful career. Take me, for example. I was fortunate enough to make it into a nationally ranked university (University of Virginia – it ranked #1 in Lacrosse this year). I earned mostly good grades and followed that up with two post-graduate degrees (Advanced Post-Modern Latvian Studies and Super-Advanced Ultra Post-Modern Latvian Studies). And as a result of all my hard work and dedication, years later, I have this humor blog to show for all my effort. Okay, perhaps, that’s not actually helping me drive home the importance of a college education.

So now you are a college graduate. Congratulations. You might have heard through the grapevine that I took Latin in high school. So I decided to look up the Latin etymology of the word “graduate.”  You may be surprised to learn that it comes from the Latin “gradus” meaning “step” and “u-ate” which is the past tense of “u eat”. So it literally means “steps having been eaten by you” or more simply put, “you ate steps.” Guess that third year of Latin paid off after all.

As you transition into the next chapter of your life (known as unemployment) set your goals high. Don’t let others tell you what you’re capable of.  On the Internet Highway of Life, don’t settle for “basic cable”. Go for the platinum plan, with 400 channels, the one with India’s All-Access Mumbai Cricket League and the Cambridge University Chess Channel.

Time for some positive self-talk. Look in the mirror and remind yourself that YOU are precisely what employers are looking for right now in this wide open job market: a low-achieving, drunken college graduate with no experience, no motivation and no discernible skills other than being the proud owner of the high score in Halo 3 in your fraternity house three years running. You deserve that $80,000/year job – don’t forget the stock options. Employers should be lining up to snag someone of your talents and ambition. But first, get back to the second half of your Madden NFL Football game against Jeremy on the X-Box. You’re only down by a touchdown, and your Econ final is not for another two hours.

I would now like to say a special word for each of you graduates, so please come closer to the screen. First, a word to those of you who finished in the top 15% of your class: The rest of you, just scroll down a couple paragraphs and we’ll catch up in a bit. 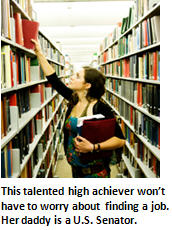 Hey, top 15% students! Nice job compiling a 3.8 GPA. Look at you on the left there, studying in the stacks until the library closes at midnight. Nice job on your senior thesis about class and religious warfare in Northern Waziristan. You have nothing to worry about from those other turkeys below who hopefully are not reading this section. Most of you will go to a top flight grad school so you don’t actually have to look for a boring entry-level job next year like those other boneheads. Be sure to suck up to mom and dad big time and you might get them to pony up another 50 Grand for that MBA program at Wharton you plan to apply to. Remember, Father’s Day is next weekend. Take Dad out for golf. Let him win. Compliment his putting game before you mention grad school. 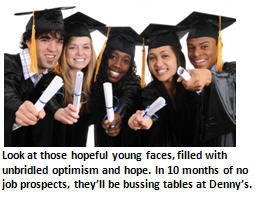 Now a private word for the vast majority of you who finished in the middle of the pack: Moo. Hello, members of the herd. Okay so you only finished college with a GPA somewhere between 2.6 and 3.4. You didn’t exactly hit the ball out of the park. But you didn’t strike out looking either. At least it’s not like you’re one of those losers in the next paragraph. You can be anything you want to be, so long as what you want to be involves looking for a job for the next 10 months and then settling for an entry level clerical job in a 6’ x 6’ cubicle and a title of “Administrative Assistant” or “Mailroom Specialist” that pays $8.25 an hour. Still you probably could make it into a second rate grad school to pursue a master’s degree in Ancient Greek Metallurgical Techniques. Yeah, that will open up a lot of doors. Good thinking, Einstein. 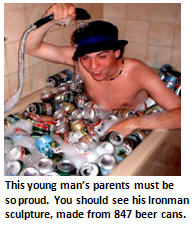 And finally, a very special word for you brainiacs who finished in the bottom 15%. That’s you on the left. Your parents must be so proud. So what if you finished school with a 1.9 GPA and your only academic achievement was that you completed your computer science term paper on time despite being totally hung over. Can’t believe your statistics professor gave you only a D- on your field research project: “Las Vegas Field Study: The Effects of Alcohol on the Probability of Winning at Black Jack.”

Oh, and nice move signing up for all those courses that grade based solely on group projects. It’s not like you did not contribute to the team. Someone had to make those beer runs. Some cynics might tell you your job prospects look a little dim. Don’t believe them. The world ahead of you is bursting with opportunity. Of course, when I say “bursting with opportunity” what I mean is any job that involves asking people if they’d “like fries with that” or you’re particularly handy with a forklift. Take comfort in the knowledge that there are thousands of parents all over the world every bit as disappointed in their offspring as yours are.

Graduation day is your big day to bask in the sun – the crowning achievement of your illustrious college career. Hopefully your hangover from last night’s toga party won’t prevent you from making it to your graduation ceremony before your name is called. Let me give you some helpful advice to make sure your big day goes smoothly: First, if you resume consciousness in time, change out of your toga and slip into something a bit more 21st century. For guys, pants would be nice. Watch your step as you shuffle inebriatedly to the podium to accept your diploma. That third step to the stage can be tricky.

When you receive your diploma, don’t thrust the University Chancellor on top of the podium, hold her in your arms and shout at the top of your lungs “I’m King of the World.” You’re not Leonardo DiCaprio. She’s not Kate Winslet. Finally, when you walk off the stage, don’t flip the bird to Professor Yuri Švābe, your Post-Modern Latvian Studies teacher and don’t shout “And you thought you could stop me from graduating, you son of a bitch.” I can’t emphasize this point enough. 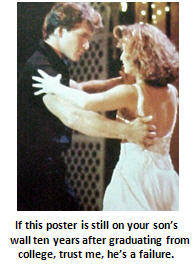 In closing, as you think about your future ahead, remember to lead your life with integrity. Follow your passion. Set your own course. Don’t let others tell you what to do or who to be. Live a life of compassion for others. Make the world you live in better for those around you and for those who come after you. Ah, who am I kidding? Let some other sap save the world and feed the homeless. Your success in life can be measured by the square footage of your vacation home and the value of your 401K portfolio.

Here’s a simple test: If by age 27 you’re living in a high rise flat in the financial district of Geneva, Switzerland, you’re probably a success. If, on the other hand, at age 27 you’re still living at home with mom and dad in the same bedroom you grew up in and you still have that Dirty Dancing movie poster on your wall, and if your model of the Star Trek Starship Enterprise you assembled in 8th grade using LEGO blocks is still on display next to your lava lamp, you’re almost certainly a failure. Any questions?

In conclusion, let me leave you with this inspirational quote from my high school Latin teacher, Mr. van den Berg, who once said, and I quote, “Tutti le verita sono facile da capire, una volte che vengono scoperti, il punto e quello di scoprire loco.” What does it mean? I have no clue. Turns out it’s an Italian quote. I don’t know Italian. I had to take three frickin years of Latin instead! Sorry. I can’t help you here.