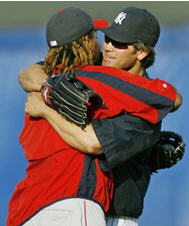 Welcome to installment #61 in my periodic series of business lessons on how you can take your business to never-before-imagined levels of success. In this challenging economy, companies are forced to do more with less and continue to look for ways to squeeze efficiencies, often by means of painful layoffs and other draconian cost controls. I have a better idea: Hug your company’s way to success.

Recently the New York Times reported fascinating findings from a soon-to-be-published research study by scientists at University of California at Berkeley. They measured the level of physical contact between teammates in the National Basketball Association over an entire season. Their conclusion: Teams and individuals that hugged, high-fived and chest bumped their teammates more tended to outperform those that engaged in less frequent affectionate physical contact.

The two teams that had the highest level of fist pounds, belly bumps and group hugs were the Los Angeles Lakers and the Boston Celtics – the two teams that faced off in the 2008 NBA Finals and look to repeat in the finals again this year. The study concludes that good teams tend to be “touchier” than bad ones. A cynic might say that teams that are successful have more reason to celebrate with hugs and pats on the butt and therefore it is their success that causes the physical contact rather than the other way around. But to accept such a cynical reverse cause-and-effect relationship would totally ruin the entire premise for this week’s advice column. So to further refute this counter argument, let me point out these additional findings: Basketball players who received high fives from their teammates after their first free throw were 65% more likely to make their second free throw.  Basketball teams whose players shared a blanket on the plane ride home with a teammate scored an average of 8.5 points more the following game than those whose players merely shared an arm rest. These are just two of the compelling, potentially fabricated statistics which, when analyzed together, point to the overwhelming conclusion that the group hugs cause these teams’ success and not the other way around. 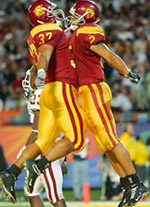 The business lessons are obvious: You want to increase your organization’s profitability? Encourage your employees to touch each other at every chance they get. Want to gain market share over the competition? Let’s see more butt slaps, everybody. If it works for the New York Yankees and the New England Patriots, then why not for Ford Motor Company or Home Depot, or for that matter, Luigi’s Old Style Pizza on Prospect Avenue in Brooklyn.

Think how much more impactful annual performance appraisals would be if they started with an appreciative hug from your supervisor? The next time you are conducting a brainstorming session about which critical features to include in the next software release, encourage your program managers to spoon for a couple hours with members of the development team. No doubt attendance for your upcoming safety training would spike if it came with free foot massages. 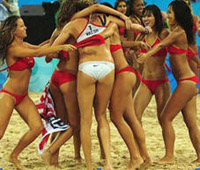 Now, I know what you’re saying – aren’t we just opening the door to a wave of sexual harassment lawsuits? Not if you get everyone drunk first. And so what if you’re threatened with one or two eensy weensy sexual harassment filings? Just show your team some of those game films of the US. Women’s Volleyball team defeating the Brazilian team – the game where they’re all wearing those hot bathing suits. Don’t you want that kind of success for your team? You don’t see those girls extending each other handshakes and exchanging business cards after they spike the winning point, do you?

I have seen countless women’s basketball teams converge around each other in victory hugging and kissing each other in raw, unabashed comradery. These winners are huggers. And now even your business has the potential to turn things around and achieve new levels of productivity without having to make painful cutbacks and sacrifices. Before you tell your senior executives they have to fly coach class on their junkets to Barbados and before you eliminate the weekly 3pm “Tequila Tuesday” beer blast, there might be a better solution you can embrace. Encourage more PDA’s in the work place – and I’m not talking about Palm Pilots. Pats work for your pets – why not for your employees? Who among us wouldn’t appreciate a little scratch behind the ears or under the chin from our boss for a job well done?

The benefits of public displays of affection should not be confined to the employee cafeteria. Smart companies will quickly realize the benefits of extending this innovative idea to their customers. Want a powerful way to increase brand awareness and build long-term customer loyalty? Coach your sales clerks to give their customers heartfelt embraces with each purchase – and a back rub for purchases over $100. Think how long the lines will be at the McDonalds’ drive-through once word gets out that cashiers plant an appreciative kiss on your cheek when you Super Size your burger and fries. Talk about a Happy Meal! 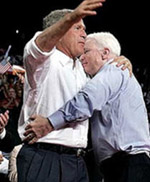 It’s time our government officials started following the lead of our successful sports teams. Think about how much more cooperation there would be across the aisles if Republicans and Democrats canoodled in committee. Let’s replace filibusters with fist bumps. Want to get that landmark piece of legislation passed, Mr. President? Me thinks I see a certain first term Congressman from Wyoming who could use a little snuggle. Oh sure, it might take time before we see House Minority Leader John Boehner offer to give Speaker Nancy Pelosi a pedicure in return for her support on immigration reform. Old behaviors take time to change. But if it can work for the U Conn NCAA Women’s basketball champions, why not for Team Congress USA?

Progressive thinkers won’t stop there. They will recognize how this concept can work equally well in just about every line of work – although if you’re an elementary school principal, you might want to take it a bit more slowly before rolling out such an initiative. I suggest you solicit the PTA’s input first. 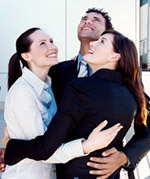 The next time you’re pondering how to impact your company’s bottom line, I say think more literally – by making impact with a few more bottoms. Look what it has done for the Los Angeles Lakers and the Boston Celtics. Just imagine where a few well-timed attaboy pats on the butt of Nadine in Accounting could lead your organization. Take my advice and pretty soon your executives will be spooning happily, all aglow about their improved profit margins.

In the future, winning business owners won’t just be embracing change. They’ll be embracing their employees too.  Chest bump, anyone?

And be sure to read next week’s Business Lesson #62: How to get frivolous sexual harassment lawsuits thrown out through obscure legal technicalities and proven delay tactics.