Some people have expressed concerns that this represents a wasteful government expenditure at a time when our economy is struggling to dig out of a deep recession. But the LOC demonstrated that it can be highly economical. In tweeting the news, the LOC simply twote: “Library acquires ENTIRE Twitter archive. All tweets. More info here.” That’s a grand total of 67 characters (including spaces). Twitter allows you up to 140 characters. So in tweeting the dramatic news, the LOC demonstrated a 52% savings of the total characters allowed – now that’s efficiency.

A brief background about the Library of Congress

According to Wikipedia, the LOC was established by Congress in 1800 as the official research library of the United States Congress. It houses the largest library by shelf space and holds the largest number of books of any library in the entire solar system. However, in full disclosure, unlike the George W. Bush Presidential Library, the LOC has no copies o 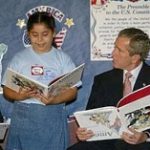 f My Pet Goat in its collection. The collections of the LOC include more than 32 million cataloged books and other print materials in 470 languages; more than 61 million manuscripts including the rough draft of the Declaration of Independence, a Gutenberg Bible, one million issues of world newspapers spanning over three centuries, and perhaps most importantly, over 6,000 comic books. And now you can add to this impressive collection, some  4.7 Gazillion tweets of varying degrees of historic, cultural and sociological importance.

This acquisition by the LOC is a landmark step forward for our society. Now, every public tweet that’s ever been twooted (okay, if my teenage daughter can spell “later” as “l8er” then I can write “twooted” – let it go) will have a permanent final resting place. You’ll be able to access historic posts of thousands of important twitterati, like these American heroes:

Not to mention these popular favorites……

Admittedly, in terms of literary excellence, most of these text burps are not quite on the level of say, Dickens’ Tale of Two Cities. The likelihood of any of these tweets garnering a Pulitzer Prize is a long shot at best. But it’s an impressive collection of 21st century spelling and punctuation that Dickens could not have imagined, let alone attempted, back in his day. This new collection will provide anyone with an Internet connection instant access to a treasure trove of profoundly important modern day abbreviated literature and insightful micro-correspondence that paints a vivid picture as to just how trivial, superficial and boring the lives of millions of people were, starting  around March, 2006. 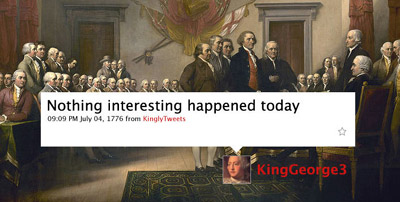 There is no limit to the amount of memorable tweets you’ll be able to wade through in this rich archive. Of course, some tweets are a bit more memorable than others. Take for example this long-lost tweet from King George III on the historic date July 4, 1776 (right). I guess news traveled a bit more slowly in our founding fathers’ time.

No question about it, this infusion of scholarly verbal narcissism will further enrich the cultural tradition that has been the hallmark of the LOC’s collection for the past 200 years. Never one to rest on its laurels, the pioneering LOC has just announced plans to offer still more enhancements to its archival collection, with the addition of the following records in the upcoming months:

You might wonder how in the world will the LOC store all this critical information.  Perhaps the schematic below will help. 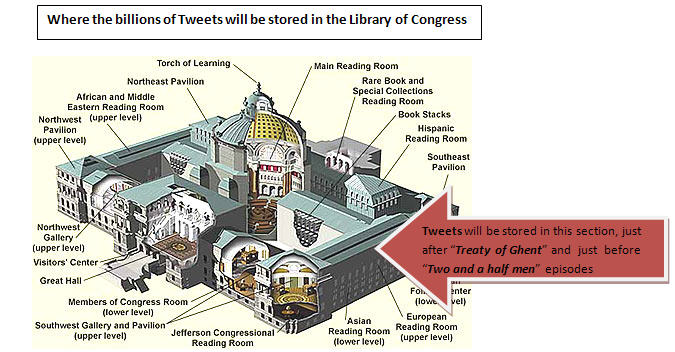 There simply are not enough terabytes of storage on the planet to hold its entire collection along with all of this new content in one centralized database. So the LOC is making room by deleting any content that predates 1985 other than a few miscellaneous texts. So with limited exceptions, like Lincoln’s Gettysburg Address or Martin Luther King’s I have a Dream speech, almost all of its pre-1985 collection will be shipped off to storage lockers in northern Alaska (the cold, dry air is good for preservation) to make way for crushing volume of Twitter and Facebook posts that will need to be stored. It was a difficult decision to remove billions of pages of rare historical documents, but when they consulted several focus groups of Twitter users between the ages of 11 and 25, none of them could even name a president prior to Ronald Reagan so officials concluded nobody would really miss this information anyway. Besides, when was the last time you really needed to look at a topographical map of Missouri circa 1873? My point exactly.

Some people are sounding alarm bells that this information could be used by the U.S. government against its citizens in years to come. They rant about past invasions of privacy and future encroaching threats to our li

berty as the government might collect this information about its people for nefarious purposes. But when has our government ever collected information about its citizenry for questionable ends? Okay, what I meant to say is when in the past two months? Okay, what I really mean is the LOC is staffed by a bunch of elderly, widowed librarians in dowdy dresses and bifocals like Gladys Miller (right). In a heartbeat, Gladys will tell you to shush when you’re talking too loudly in the map reading room, but she would never abuse this information. I totally trust her. What could possibly go wrong?

Yes, there are many serious challenges demanding our government’s attention right now. But I can think of few better uses of our government’s resources than to create the largest archive in the history of the world of forgettable, inane musings and fractured grammar. Think of it – a centralized repository of all the mindless tweets of our era, saved for posterity. It’s sheer brilliance. How else would our grandchildren know what we ate for lunch and what articles in Wired Magazine we liked in our lifetime? There won’t be any newspapers around by then to tell them, that’s for sure. But thanks to the sage vision of the LOC, now with just a few mouse clicks, our grandkids will be able to look up what our Supreme Court Justices had to say about a landmark court ruling, as well as what grandpa Alvin had for breakfast on May 19th, 2007. This is information we must zealously guard and preserve if we wish to hold onto our God-given right as Americans to tweet. It’s in the Constitution… somewhere… I’m pretty sure. Maybe in one of the Amendments. I’m thinking it’s the 34th or thereabouts. I’ll tweet the answer l8er.

Someday, years from now, someone might just stumble upon a tweet that invites them to read this very blog post you’re reading right now (you are still reading, aren’t you?) and they just might pause, reflect briefly, and ask themselves “what in the world was this guy writing about? What the hell is a “bleacher”? And I wonder what he had for breakfast…” And if so, then I will know my life had meaning.