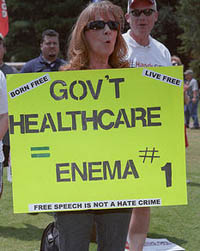 So naturally I am outraged. According to the CBO (stands for “Congressional Budget Office” but if you ask me, it should be called the “Congenitally Biased Office”) their math indicates the newly passed health care plan will save over $1 trillion over the next ten years. But how do you put a price tag on the loss of our fundamental freedoms, like the right to bring firearms to town hall meetings, teach creationism to our young or keep dangerous consenting homosexuals from destroying the moral fabric of our society by marrying each other and raising little homosexuals. 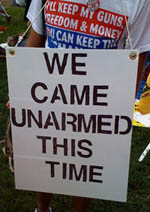 Any cursory review of the sound bites I have heard on Fox News is enough for any right-minded American to know we must stop this kind of infringement of our basic human rights to let our insurance companies increase their annual premiums by 20 to 50% this year compared to 2009 (as reported in the Feb 18th edition of the Wall Street Journal).

Oh sure, Communist-sympathizing Ivy League academics may try to confuse us by spouting specious research from left-wing think tanks with socialist agendas, like the Pew Charitable Trust about how without health care reform health care costs are predicted to skyrocket over the next ten years. One obviously biased study says that by the 2016 Americans will be paying $4.1 trillion dollars for it, roughly equal to 20% of the GDP. Another bogus left-wing study indicates that nationally, family health insurance premiums increased 119% between 1999 and 2008, and could increase another 94% to an average $23,842 per family by 2020 if cost growth continues on its current course.

I say, don’t believe any of these fancy pants reports with all their facts and stuff. I have uncovered a few objective polls that paint quite a different picture. According to a Fox News – National Rifle Association poll of randomly sampled white males named Bubba, ages 45 to 74 with less than a 7th grade education in Texas, Mississippi, and Arkansas, 93% strongly oppose the health care reform. An impressive 78% have no stinking clue as to what the bill’s provisions contain but are vehemently opposed to it nonetheless.

There is a tidal wave of opposition to the new health care legislation. According to a recent Fox News – Skoal Chewing Tobacco poll: 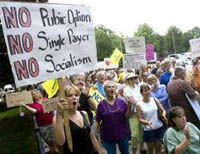 72% of Americans would rather be forced to eat shards of broken glass and drink their own urine daily than have to live in a country where universal health care is the law.

85% of Americans would rather sell their elderly mother into a Bulgarian gypsy sex slave ring than participate in a health care system with a public option.

127% of Americans who don’t know any of the details of the plan are strongly opposed to it and don’t have the time to read the four-page executive summary.

19% of respondents are of the opinion that Barack Obama is a Muslim terrorist sent here on a mission by Osama Bin Laden to destroy America (7% think his last name used to be Osama until he changed it for political reasons).

Other polls show the same kind of overwhelming disapproval. A USA Today poll taken immediately after President Obama signed the health reform legislation into law showed an astounding 40% unfavorable view of the new legislation (compared with barely 49% in favor). Oh sure, some liberals might quibble that of the 40% indicating they were “not in favor” of the new legislation, a tiny portion – roughly one third – held an unfavorable view because they felt the reform legislation did not go far enough, but that is totally besides the point and probably subject to statistical error.

What we clearly have is a government takeover – not just of our health care system, but of our entire American way of life. Where will it end? This health care reform bill, now law, is just the first step down the inevitable slippery slope to an Orwellian society in which our government will tell us what car to buy, who to marry, what sleep setting number to use for our mattress, and what toppings to put on our pizza. Do you want to live in a land like this? It’s right around the corner. Just ask any loyal Ditto Head.

Do we want to be like Luxembourg? Hell, No! We’re Americans, Damn it. We don’t follow anybody else’s lead. We do things our own uniquely American way. If it will cost American families a few (trillion) dollars more in premiums or if we have to leave a few (dozen million) people uninsured to avoid turning our nation into another Denmark, it’s well worth the price. At least we’re free – unlike all those enslaved people in Finland, Israel and Japan. And it must be hell being a Canadian – universal health care and millions of citizens forced to watch hockey every Saturday night. No thank you. Not in my gated community.

Don’t you see where Obamacare is going to lead us as a country? My concerns were perhaps most eloquently summarized by some of the leaders of the loyal opposition who passionately but thoughtfully argued against the merits of this misguided legislation.

A big “Amen” to Representative Michelle Bachmann (R – Minnesota), who intoned “Grandma isn’t shovel-ready!” How true indeed. I don’t want any government death panel telling me when I must pull the plug on Grandma. That decision should rest solely with those children who are listed in Grandma’s inheritance.

Like most Americans, I’m proud of Representative Randy Neugebauer (R – Texas) who stood up and shouted out in a session of Congress that lifelong Right to Life advocate Representative Mark Stupak of Michigan was a BABY KILLER. It was just an innocent slip of the tongue, of course. In a bit of heartwarming news, ever since his Baby Killer comment, political campaign contributions to Rep, Neugebauer’s web site have been flooding in.

But perhaps Representative John Boehner (R – Ohio) summarized it best when he described the passage of health care reform in one word: “Armageddon.” Time for us to hit the bunkers, my friend.

This drive by the Democrats in Congress to ram this bill down America’s collective throat is all about special interest groups – the elderly, the homeless, at risk groups like people with pre-existing conditions, and people who lost their coverage when they were laid off. These special interests don’t represent America. Glenn Beck does. Thousands of concerned Americans have called their representatives in Congress to leave patriotic death threats and other well-intentioned, obscenity-laced messages to communicate their discontent about this nefarious legislation.

And another thing, why are we rushing into all of this change anyway? It’s not like health care reform is a pressing need right now. I’m only 55. I had a physical last year and the only thing my doctor mentioned was that my cholesterol was up a bit. We have far more pressing issues to tackle, like which president’s face should go on the back of the dime and whether to rename the airport in Sioux Fall, SD after Chief Sitting Bull. We need more time to discuss the pros and cons of this very complex issue. 14 months of debate, 390 town hall meetings 5 health care summits and 6 months of non-stop Congressional hearings on C-Span is not nearly enough time to think through the implications of this bill.

That’s why I endorse the Republican plan to scrap the current piece of legislation completely and start over from scratch. If we all really get focused this next time around, we should have a bill America can be proud of just in time for the 2020 election, a good four years before the Social Security System is forecast to go bankrupt.

Thankfully, 13 Republican states’ Attorneys General are filing lawsuits to stop this frivolous legislation on the grounds that it’s unconstitutional – and because its passage really hurts their party’s chances in the upcoming Fall midterm elections. They agree with me that our government has no business getting involved in such private issues as protecting the health of its citizens. The health insurance companies are doing an outstanding job. Thank God their lobbying arm (known as the Republican Party) was able to block the Communist plot known as the Public Option. The last thing this country needs is a government-run, not-for-profit public option that might harm private health insurers by forcing them to lower their premiums to remain competitive. Let’s leave it to the market to set the prices. It’s always worked quite well in the past.  Just ask any insurance company’s board of directors.

To top it all off, our very own Vice President had the nerve to choose the official ceremony in the White House when President Obama signed the legislation into law to shout out “BLEEP YOU, America!” at the top of his lungs. At least, that’s how Bill O’Reilly described the scene in his objective news commentary. At first glance, it may have appeared that Mr. Biden whispered into the President’s ear “This is a big f*cking deal.” But you and I both know what he was really saying. He was giving the finger to America and to our freedom.

I for one won’t stand for it. I’m joining the fight to take our country back from the elite Socialists in Washington. I have joined the Tea Party movement and look forward to the day next year when we Americans band together to shove a repeal of this legislation down Mr. Biden’s throat… that is, of course, unless it turns out that I lose my job between now and then.  But that could never happen in this economy.