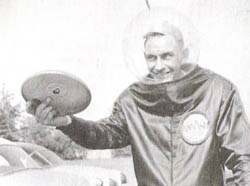 Deep thought of the day: “I kept wondering why the Frisbee seemed to be getting larger and larger… and then it hit me.” Normally that always gets a laugh out of me. But not today.

Pardon my melancholy mood. Perhaps the greatest American inventor of the 20th century just left us. Of course, I am referring to Walter Morrison, inventor of the Frisbee. Actually, he called his invention the Pluto Platter – before he turned over the concept (and what would have been his future fortune) to the nice folks at Wham-O Incorporated. Mr. Morrison passed away last month at his home in Utah at the age of um…. old as dirt.

Oh sure, the 20th century brought us a lot of other interesting novelty inventions – the automobile, airplane, radio, television (wasn’t that a crazy fad!), personal computer, cell phone, and the Internet, to name a few. It also gave us a few more serious technological breakthroughs like Big Mouth Billy Bass, Ronco’s Amazing Mr. Microphone (“Hey good-looking. We’ll be back to pick you up later!”) and my favorite, the Clapper.  But surely they all pale in importance next to the impact the Frisbee had on the formative years of millions of American youths over the past half century.

The list of great icons of the 20th century is long.  Martin Luther King Jr., Mahatma Gandhi, Jesse Owens, Rosa Parks, John Glen, Paula Abdul, and Homer Simpson are just a few of the names that come immediately to mind. But I’ll stack up the shy, soft-spoken Utahonian (Utahnian? Utahmanian? Oh, forget it) named Walter Morrison (known as “Walter” to his friends) up against any of them (no particular reason for this third parenthetical comment in the same sentence. I just felt like inserting it here. Hi, mom).

Little did the ingenious Walter Morrison know when he came up with the idea of a flying disc toy using the lid of a popcorn can (true) that someday a large multinational conglomerate would turn his innovative idea into a 50-year cash cow, and in return thank him with the loveliest fruit and cheese basket he’d ever seen. The young inventor Walter soon replaced the popcorn can lid with a cake pan because it flew better. He then experimented with several other common household objects including a pizza pan, frying pan, waffle iron (not quite sure what he was thinking there), lamp shade, even his father’s rare 1918 gramophone recording of Al Jolson live at Radio City Music Hall (oops – that did not go over well with the old man) before settling on the now famous patented Frisbee design.

Walter rarely talked about his badly flawed early prototype design using his dad’s brand new circular saw blade that required the family Golden Retriever to get 87 stitches when in an ill-fated move, it instinctively leaped to play fetch. And Walter never forgot his father’s stern but concise lecture afterwards, when he put his arm around young Walter, leaned in and asked “Son, what the f*ck were you thinking? Seems I have a moron for a son…” and walked away, nodding his head in disgust. Young Wally was grounded for a month but he learned a valuable lesson about the use of carpentry tools.

The Frisbee is an ingenious toy – one that can be enjoyed over and over, that is of course, until it inevitably gets stuck on your roof or your dog absconds with it for his own saliva-coated chew toy. Over the years, most toys come in and out of fashion and eventually lose their appeal. You can hardly find a Cabbage Patch doll around anymore. Whatever happened to the popular 1960s’ Milton Bradley Junior Chemist Uranium Isotope Maker? And when was the last time you saw any four-year old with that “must-have” toy from yesteryear, the Officer Bob’s Tiny Toddler Taser, from Mattel? Or Bozo the Clown’s Atom Smasher Fun Machine? And I’ll bet most of you don’t even remember the once wildly popular “Jonny Quest Amazon Poison Dart Kit – for the young Jungle Adventurer in your house” (some assembly required). Thanks a lot, Consumer Protection Agency. What a bunch of jerks.

But more than 50 years later, the Frisbee remains as popular as when Whamo-O first convinced the naïve, trusting young Walter to “just sign here, oh, and initial there.” The Frisbee’s secret lies in its simplicity. Lovely to look at, yet so simple, so uncomplicated, and within seconds you have completely figured it out. Perhaps that explains the appeal of Sarah Palin. But I digress.

The original Frisbee has survived market challenges from several bold imitators, none of which were able to overcome their own fundamental design limitations. I speak of course about the failed “Romulan Rhombus” (turns out a rhombus? Aerodynamic? Not so much) and the equally ill-conceived nine pound “Flying Martian Mystery Cube.” I wanted one so badly for my 4th birthday but got a Slinky toy instead. Turns out the Slinky didn’t fly through the air any better than the Flying Martian Mystery Cube. So I went back to playing with my Tiny Toddler Taser…. with my pet turtle, Myrtle. For reasons unclear to me at the time, she seemed to move around even less than usual after that.

A Frisbee was a constant partner in my journey from childhood through adolescence and even through college. Ah so many happy memories – like the time in 7th grade when I accidentally threw one over the neighbor’s fence, never to see it again. Or the time in 11th grade when I errantly sent one smashing into our expensive living room window. Or when after my freshman year in college, I was at the beach with my girlfriend Rhonda, and some upper classmen bullies moved in on me and walked off with Rhonda and my Frisbee. Gosh I miss that Frisbee. Nowadays, when I pack for a family vacation, I will never forget to bring my Frisbee – forget to bring a daughter? Perhaps, but never my Frisbee. 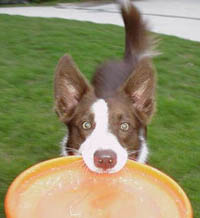 My point is, the Frisbee has been the part of every red-blooded American boy’s life for the past fifty years. Years later, we may not remember the difference between an isosceles triangle and an equilateral one or the name of the villain in Shakespeare’s Macbeth (spoiler alert: It’s Macbeth), but we all know how to throw a Frisbee – except for my wife, of course. Ever since boys stopped playing fetch with circular saw blades, it’s been a key part of the bonding ritual between every dog and their master. It’s a toy enjoyed by boys and men the world over (if you don’t count Afghanistan, where I’m pretty sure it’s been banned by the Taliban, those heartless bastards).  It’s what separates the world I live in from a life not worth living (well, that, Chocolate Chip Cookie Dough ice cream and TIVO). 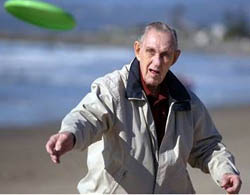 Mr. Morrison’s passing last month is a sad loss to people like me who remember the countless hours of pleasure this simple disc gave us before we lost it down the sewer drain. It is therefore perhaps fitting that as a way of paying a final, lasting tribute to Mr. Morrison (that’s actually him on the left), his family opted to forgo the formalities of a traditional burial. Instead, they tastefully placed his coffin on display where it rightfully belongs – on the roof of his house. May he spin in peace.