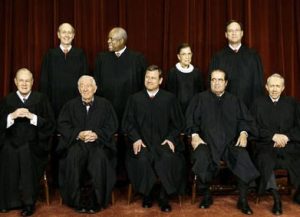 God bless America. On January 21st, the Supreme Court of the United States finally brought justice to a long oppressed minority: Citigroup – and the other Fortune 500 companies which have for too long been ignored in our Democracy. I for one could not be more proud to be an American than I am right now. Yes, in a stunning landmark ruling that overturned more than 100 years of misguided legal precedent, the Supreme Court courageously broke down one of the longest-running barriers that enslaved our corporations and barred them from one of the fundamental rights every other citizen has long enjoyed: The right to free speech.

In a historic, overwhelming 5 – 4 ruling, the Supreme Court decided that the First Amendment right to free speech extends to corporations as well as individuals, thus finally opening the doors to unlimited spending on political campaigns by corporations like Pfizer, Microsoft and Starbucks, which until now, had to suffer in silence, without a voice in deciding who will represent our country in government. The Court held that corporations have all the rights of people. Well, it’s about time.

Today is a bright, sunny day for America. For far too long, the “Joe Six Packs” of the country have had an undue influence in deciding who wins elections. Half of them can’t tell the difference between a hostile takeover and leveraged buyout. Meanwhile, corporations, which have long paid close to their fair share of taxes (unless they could find an appropriate tax loophole or a safe offshore tax shelter), have had to sit on the sidelines of the political debate, muzzled like some mangy dog you chain in the back yard so nobody will see it. Well, not any more.

With a bold sense of American ingenuity that sets us apart from less civilized countries like Denmark, American corporations have wasted no time in letting their long muted voices be heard. In the past week alone, I have seen the light about the countless lies routinely propagated by academics, researchers and scientists, thanks to a barrage of highly informative TV commercials, radio ads, direct mail flyers and mass email blasts from civic-minded corporations, nobly uncovering the falsity of widespread information that interferes with their quarterly profit margin targets. For example…

Thanks to an hour-long documentary infomercial from Altria (formerly Philip Morris – they changed their name for perfectly legitimate business reasons – because for some reason some people unfairly associated the industry leading maker of cigarettes with cancer) I now realize that Initiative 527, which would ban smoking in public school classrooms, is an outrageous infringement of the longstanding 17th Amendment’s right for children to smoke in public places.

Until the recent airing of Morgan Stanley’s series of 500 thirty-second commercials over the past three days, I had naively thought that increased regulation of banks, and in particular previously unregulated financial instruments, was in the public interest. I now realize, thanks to Morgan Stanley, that the politicians behind the move to regulate the banking industry are in fact reckless, flag-burning socialists, who want to turn our country into Canada and leave us vulnerable to terrorists.

It was not until I read my latest copy of the Exxon-Mobil Wall Street Journal that I realized that all the supposed “overwhelming scientific evidence conclusively proving man’s role in global warming” was just speculative, unsubstantiated propaganda, with very little scientific research behind these specious claims (other than a few thousand articles in reputable scientific journals). In fact, I learned that drilling for oil and burning fossil fuels is the only thing between our safety and the planet entering the next devastating ice age. 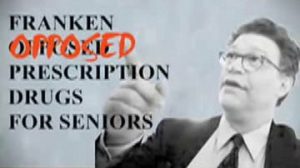 Thanks to these God-fearing corporations, I have a new understanding about so many issues I never comprehended before. Thanks to the Supreme Court’s ruling in January, and a flyer I received in the mail from a few patriotic Fortune 500 companies, I now know that the move in Congress to require snack foods to have information about fat content will result in the loss of 4 million jobs (Hershey’s). I also know that pending Congressional legislation to regulate the sales of credit default swaps will result in another 1930’s era Depression (Goldman Sachs). And thanks to a flyer from CIGNA Insurance, I now know that Democrat Representative Ed Bailey of the 27th Congressional District in my state is a closet homosexual who once smoked pot in college, oh, and voted for health care reform. So I’m voting NO on Ed Bailey for Congress because he wants to turn America into France. 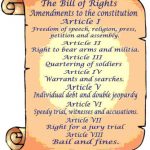 Finally our corporations are able to stand up just like any other American and shout out “I deserve to be heard.” Corporations should of course have the same rights as any other individual – to speak, to vote, to laugh, to love, yes, even to cry. The inalienable rights that every white male American has enjoyed for the past 200+ years and which women and minorities also posses (thanks to a bunch of whining), should apply equally to corporations. It just makes sense.

The recent precedent-smashing Supreme Court ruling has resulted in a tidal wave of wonderfully unanticipated “aftershock” rulings that are finally giving corporations a much deserved seat at the table of basic human rights. Here are just a few game-changing rulings our nation’s highest court has handed down in the past couple weeks:

In a 5 – 4 ruling in Kraft Foods v. the State of New Mexico, corporations can now run for public office. The latest polls in the Tennessee governor’s race show PepsiCo now leading the incumbent by 20 points in the latest Gallup Polls (Footnote: The Gallup poll was sponsored by Frito Lay, a wholly-owned subsidiary of PepsiCo Inc.)

In a 5 – 4 ruling in Seattle School District v. Trojan Brand Condoms, corporations can now teach in the public school system so long as they have valid teacher’s certificate.

In a 5 – 4 ruling in Meriwether v. Verizon Wireless, corporations can now marry individuals, so long as the individual is at least 18 years of age.

In a related case, in a 5 – 4 ruling in Barrett v. the State of Mississippi, consenting gay adults cannot marry. Justice Samuel Alito wrote in his majority opinion:”Giving gays the right to marry is something the Founding Fathers never could have imagined nor intended. It’s not like they are a corporation or anything.” 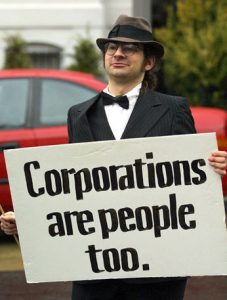 Today, corporations everywhere from GE to Johnson & Johnson, from Kaiser Permanente to Chevron are rejoicing about the wonderful new America we are about to embark on. All the eventual implications of this truly landmark ruling cannot be known yet. Will corporations decide to invest a small amount of funds to support political candidates who will help their stock price? Perhaps. Will corporations be a little less shy about uncovering unseemly news about candidates they oppose? Potentially. Will the agenda of our nation’s Senators and Congressmen and women become tilted towards an agenda that rapidly retreats from long overdue healthcare reform and regulation of the financial industries despite the economic meltdown created by the very lack of such regulation? Impossible to say.

All we know for sure right now is that thanks to this recent Supreme Court ruling, America has taken a giant step forward in recognizing that the fundamental Constitutional rights of life, liberty, the pursuit of happiness and the right to hand pick our next President lie firmly in the caring, God-fearing, protective embrace of DuPont Chemicals, Ford Motor Company and thousands of other right-minded corporations. And that means our America’s representative democracy is safer now than ever before.

In closing, I would like to share with my loyal readers a bit of happy personal news. Just this past week, my family agreed to be acquired by Wal-Mart. My new name will be Timothy Wal-Mart-Jones. Just as soon as the SEC filing goes through, our family will officially become a wholly-owned subsidiary of Wal-Mart Holdings DBA Wal-Mart Stores. In addition to the financial security this consolidation provides to our family, our kids will also get 25% off on all brand name merchandise in any of the 4200 Wal-mart or Sam’s Club stores nationwide. We think it was a wise move for our family.

That’s the view from the bleachers. Perhaps I’m off base. Today’s blog is brought to you by VISA. Because Life takes VISA.