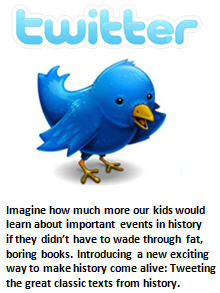 * Carrie: Made a tasty casserole for dinner! The secret is extra Tuna Helper.

* Scot: Off to the upper Haight to replace the tongue ring I broke on the plane. (I am not making this one up, I swear.)

* Mick: They are serving F11 in the snackateria!

See how useful Twitter can be? Hard to imagine how we ever survived without it, I know. The great thing about Twitter is that because of its 140 character limit, it forces you to communicate with concise precision, like my buddy Scot did in the example above. No wasted chatter about how he broke his tongue ring on a plane or whether he is also going to buy a new bong while he is in Haight Ashbury. No, just the core “need-to-know” facts.

And not being known for my brevity, at first tweeting was a real challenge for me. Here are a couple of my very first unsuccessful tweets:

But I think I have, with practice, found out how to get to the point in 140 characters or less. Now I tweet all the time. Which got me to thinking (oh no, there he goes again – thinking – this can’t be good), what a wonderful learning tool Twitter could be for kids. If your kids are like mine, they have roughly the attention span of a Meerkat on a diet of Mountain Dew. It’s no wonder the great classics bore them – they’re so full of… well, words.

So I was thinking, wouldn’t it be great if kids could read a condensed Twitterized version of the great speeches and important texts from history. Imagine savoring the classics in roughly the time it takes to burp. Just think how much more excited our kids would be to learn.

So I took the liberty of condensing some of the great speeches, historical treatises and literary classics into convenient tweet-size packages. Here is a small sampling of what could someday become Classic Tweets:

Shakespeare’s Romeo and Juliet: He loves her. She loves him. Parents just don’t understand. She fakes her death. He didn’t get the memo. He kills himself. She kills herself. A rose by any other name would smell as sweet, blah blah blah… The end.

The Declaration of Independence & the US Constitution (they’re pretty much the same thing):  King George is a jerk. We’re so done. We declare ourselves free. We hold these truths to be self-evident: All white males with property are equal. Oh yeah, WE’RE NUMBER ONE! Click here to check out our latest amendments. 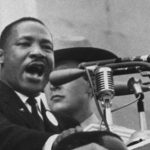 Martin Luther King’s “I have a dream” speech: 100 years after the Emancipation Proclamation blacks are still not free. Hello?? What’s that all about? Gosh it’s hot in DC today. Anybody have a fan?

The Gettysburg Address: Four score and seven years ago we became a new country. This Civil War sucks.  Let’s pull together, boys, and win one for equality. Anybody up for going to see a play? 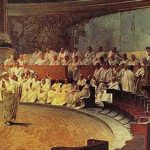 Neil Armstrong’s famous first words on the moon speech: That’s one small step for (a) man, one giant leap for mankind…. Hey Houston, check out this view! It‘s totally mind-blowing, dude. I can see Russia from here. 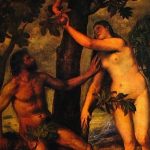 I have proposed this idea to the good folks at Twitter and am waiting to hear back. I even have a name for this new product idea: “Twitter’s Speeches & Historically Important Texts” or “Shit Twits” for short.

Imagine how much more fun learning would be if you read just a few tweets? Think about how quickly our kids could learn if we tossed out those boring 500-page tomes and replaced them with Twitterized versions.  With just a few short tweets, kids could learn about the Fall of Troy, Genghis Khan, and WW II, not to mention the location of Lindsay Lohan’s current rehab facility. Isn’t technology great?