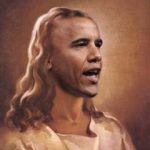 I know, it sounds like an episode of Punked. An Internet prank, right? After all, he has been our president for less than nine months. The Nobel Award Committee actually closed the nominations in early February, roughly three weeks after Obama’s inauguration. Obama beat out 171 other individuals and 33 organizations – including a dude from Ethiopia, who freed 2,000 slaves from the Sudan, carried them on his back, one at a time 300 miles through the 120 degree Saharan Desert heat and then fed them cookies – Oatmeal cookies, I believe. How did that guy not win?

Even Obama’s most ardent supporters (and I’m one of them) would admit that despite a gift for delivering a few inspiring speeches and a moderately successful beer summit, he really can’t claim many concrete achievements yet – certainly not in the area of world peace. An A for effort? For sure. But results? No so much. 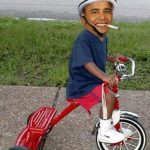 And yet somehow, the rookie 44th president – barely out of his presidential training wheels – won the most prestigious International award there is. My personal theory? He must possess incriminating photos of one of the five Norwegian judges – I suspect a leather spiked dog collar, hand cuffs and a rubber duck outfit were involved

Talking heads speculate that it was not so much the Nobel Peace Prize that he won as much as the No BUSH Peace Prize – that this European body of judges gave him the award in part because his approach to international diplomacy departed so noticeably from his predecessor.

So the investigative reporter in me was determined to get to the bottom of this mystery. How did he win? What I have uncovered may shock you. It turns out that Obama has a superhuman charismatic touch that no mere mortal can resist. I was able to break into the files of a variety of prominent awards committees (as an investigative journalist, I am allowed to break into files, just as long as I put everything back neatly). Turns out that our new president is not just held in high esteem by the Nobel Peace Prize Committee, but by several other awards bodies as well. I can now reveal for the first time that President Obama will soon be announced the winner of the following prestigious awards and honors:

• In a stunning turn-around, a separate Nobel Committee will withdraw its Physics Prize which it had previously handed out to three scientists for breakthroughs in fiber optics and semiconductor circuit imaging. Instead, they will bestow the Physics award to Obama. Said Physics prize judge, Olaf Svensen “Mr. Obama is a true scholar. We were deeply impressed by his high school experiment where he mixed Diet Coke and Mentos to make a bottle rocket that went over 50 feet in the air. Brilliant.”

• He also will win the 2009 Pulitzer Prize Award for Literature for his 2006 book, Audacity of Hope. Said one member of the prize committee who asked to remain anonymous: “While it was rather light on substance and insights, I just found it to be a real page turner. I couldn’t put it down.”

• In what can only be considered a confounding turnaround, Taylor Swift’s award for Best New Video at the MTV Video Music Awards will be retroactively reversed and awarded to Obama. The award will be presented to him by Kanye West.

• For the first time ever in the history of the award, a democrat – you guessed it, Obama – will win the Republican of the Year award. Said Michael Steele, Chairman of the Republican National Committee, “Personally none of us on the committee can stand the guy. But we simply could not resist his overwhelming appeal. How do you say no to that smile?” 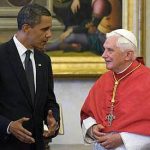 • The Vatican will release a statement that upon the death of Pope Benedict the 16th The Sacred College of Cardinals will unanimously recommend Obama for the vacant see.  “It’s a virtual lock” said 185 of the Cardinals, who wished to remain anonymous.  The Catholic Church gossip magazine, The Vatican Rag, says that they are in possession of never-before-seen photos of Obama being fitted for a Pope’s Mitre.  Obama will be given an honorary Catholic conversion pass, since he is currently Baptist.

• The 2010 World Cup, to be held next year in Johannesburg, South Africa, normally goes to the team that makes it all the way through the tournament victorious. In a stunning break with long-standing tradition, the World Cup Committee has decided that the 2010 winner will be Barack Obama, even though technically he doesn’t even constitute “a team.” Sorry, Brazil and Spain.

• Time Magazine will award Obama Man of the Millennium for 2000 – 2999: The Editorial Board, after much heated deliberation unanimously agreed with this decision, noting that there was really no reason to wait.  The outcome was a foregone conclusion, so why wait another 1000 years? Besides, they concluded it would be good for newsstand sales, which are off by 10% this year.

Other awards he is scheduled to win in 2010 include:

I know it’s hard to believe just what kind of universal appeal this man possesses. Outside of Rush Limbaugh, (whose head actually exploded upon hearing the announcement), it appears people of all political persuasions throughout the world are powerless to resist his irrepressible smile and gift for inspirational oratory. There is no truth, however, to the rumor that he will win Best in Show at the Westminster Dog Show next year. Clinging steadfast to tradition, they have resisted the pressure to relax the eligibility requirements and have issued a statement that the Best in Show award will continue to go only to canines, not humans, for the foreseeable future.

I was going to nominate our house for Best Christmas Decorations Display in our neighborhood’s annual Christmas House Decorating competition this December. I was really planning to go all out this year – with those giant Costco snow globes and everything. But what’s the point anymore. We both know who’s going to win.